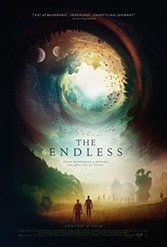 In Justin Benson’s and Aaron Moorhead’s chatty time-loop flick, siblings Justin Smith (Benson) and brother Aaron (Moorhead) decide to return to Camp Arcadia, a rural cult commune from which Aaron rescued his brother nearly a decade before. But mopey Justin is curious about his past and nostalgic for cult food. Aaron, though squeamish, agrees reluctantly.

What they find doesn’t seem like a “UFO death cult,” but is closer instead to a collective that cultivates barley for beer and seems to lead to a wholesome life. But all is not right at Camp Arcadia. No one at the camp seems to have aged since the brothers left as boys. There are two moons rising. The camp’s denizens, led by smiling leader Hal (Tate Ellington), while beholden to an unspoken higher force, appear content to lead a groundhog day-like life — déjà vu all over again, as Yoga Berra once famously said — awaiting the third moon and “ascension,” when a UFO (what else?) comes to fetch them. Much of this escapade is really about belonging and estrangement—from siblings, friends and society—and the extent to which a life of dead-end jobs and boredom is the only choice when presented with paranormal alternatives that promise immortality in exchange for dying on command.

The never-seen alien force, to quote one character, uses “space and time as its horse whip,” leaving all in Arcadia, whether there by choice or accident, to serves as a cog in reincarnation’s tedious machinery. Like Hotel California, you can check out, or try, but you can never leave — a thought screenwriter Benson tries bending into a parallel version of life itself.

A nice enough fantasy premise if the camp itself offered more stimulating conundrums, or just scarier ones, which regrettably it doesn’t.