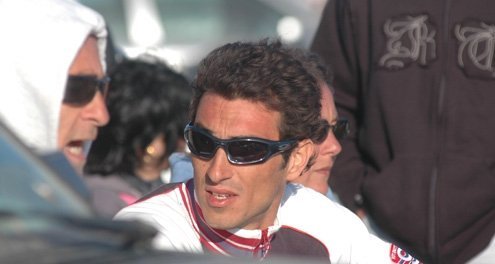 People thought we were crazy, says Rome surfer Roberto Merli. “The water gets so cold here during the winter."
L

ike most surf trips I’ve ever been on, this one started before dawn. Four of us piled into the car under the cover of darkness, boards fastened to the roof, with the car stereo blasting the Red-Hot Chili Peppers and obscure punk bands reminiscent of my California youth in San Diego. The preliminary rituals were familiar, as was the uneasiness every surfer feels nearing shore when thoughts turn to getting “skunked” or worrying about not finding waves.

But this was a good morning. We were on the Ostia shoreline 20 minutes from Rome and the waves looked good: slightly overhead, which means a bit more than body height, and stacked up with long workable sections, thick swathes of curling water you can ride. We grabbed our boards and headed into the water.

Enter a stiff-kneed figure with a fluorescent green bathing cap flailing his arms as he pumped up and down trying to balance himself on a flat-looking 1970s-style board.

A friend paddling next to me just smiled.

Italy caught the surf craze in the 1980s, when Italians brought the sport home from visits to Hawaii and Australia. Since the Mediterranean provides little consistent surf, only diehards insist. They call themselves a “tribe” and Roberto Merli is among Rome’s local leaders. He ran a surf shop in the 1990s, giving it up so he could spend more time in the water. “People thought we were crazy,” says Merli. “The water gets so cold here during the winter.”

Merli, 30, called “Lungo” by his friends, is a lanky, tattooed Rome native. He helped pioneer surfing in Ostia, the capital’s seaside port town. Known mostly for its obtrusive beach cabanas packed on weekends, Ostia can also provide ridable waves — usually ahead of storms from the south.

Surfing has slowly found a trend-setting niche in mainstream Italian culture. The music of Jack Johnson, a California band that pumps out soundtracks for surf videos, is ubiquitous in beachfront bars and stores. Quiksilver, an American surfing apparel company, has opened a store in Milan near Porta Ticinese (Speedo is out, long “boardshorts” are in.) Ostia’s popular Blues Café has surfboards on walls and the latest surfing videos play on big screen TVs.

As with most summer styles in Italy, it’s all about what’s fashionable.

“Dressing like a surfer has become very trendy,” says Tony Di Bisceglie, who runs Ostia’s DB surf shop. “A few years ago there were just a few shops, now there are over 20.” Owning hard-to-get surf brands such as “Hurley” and “Volcom” confers insider status.

Ostia’s core surfers have their own tightly knit group. Most are in their late 20s and 30s with colorful nicknames like “Pappagallo” (parrot), “Sciacalletto” (little jackal) and “Pomodoro” (tomato). The latter once filled in a missing front tooth with surf wax to score a date on the beach.

The sport is also catching up with the image. Di Bisceglie switched from windsurfing to surfing two decades ago and now runs a beachside surfing school that offers a diploma. A training course typically costs between €80 to €100. “We get a lot of different types,” he says. “Little kids, and people in their 60s who jump in the water with a long surfboard.”

Italian surfing has its own language. Phrases are transliterated. “Go back to the Valley!” — California slang directed at the inexpert or the flailing — comes out Italian style as “Go surf the Coliseum!”

The biggest challenge faced by Italians is the tameness of their surrounding seas. The Mediterranean is unkind to surfers who thrive in the swells of the Pacific. “We wait and wait and wait,” says Lungo. “We’re so into it because we don’t have waves everyday.”

When waves do come, Italian surfers are notorious for dropping everything: work, girlfriends, family engagements, even groceries, and getting out to sea. Ostia surfers fight over waves that would draw a yawn in Hawaii. But modest swells don’t make smarter Italian surfers any less savvy and well versed in the head nods, frowns, whistles, hoots, and hand signals that define surfing’s international vocabulary. Italians can “rip” — or surf aggressively — with the best of them.

But swells, wholly dependent on wind, pop up and dissipate quickly. This leads to another aspect of Italian surfing: travel. Italian surfers are well-heeled pilgrims. Bali, Costa Rica, Australia, and California are frequent destinations. “Not having ocean waves [means] you go and look for them,” says Merli.

“It’s a choice of life,” says 47-year-old Michele Tartaglia, or “Michelone” (Big Michael), a lifeguard who lives with his mother to put aside surfing cash. Free time, he says, is more precious than money. He rues the “strict” Italian mentality. “If I have to work to make money but don’t have the time to enjoy it or spend it, what’s the point? Seeing other cultures, other people, you can learn a lot of things.”

Such single-minded devotion to waves means most surfers have not studied past high school. Many are international, possess worldly intelligence, and speak a second language.

Sometimes, though, a surfing trip can turn sour. Michelone and close friend Riccardo Cioni, 43, were in Sri Lanka in January when the Indian Ocean tsunami struck. “I was in my room while the water was coming in,” recalls Michelone. “It was like a river that never ended.”

Cioni’s view was more dramatic. Surf kayaking when the wave came in, he paddled toward it in an attempt to stay level. “A lot of people wanted to get out of the water but I said, ‘No, no, go out!’ The wave was maybe six meters tall, but once you went up it, you didn’t come down. It was like the ocean had literally risen six meters. We watched from the water as the tops of buildings on shore were twisted and destroyed, heard the screams. It was like the ocean was chewing everything. I was in shock.”

Cioni’s disturbing recollections are nonetheless typical of the ambitious Italian surfing community, an unfettered global and mobile tribe. Whether in Ostia or Sri Lanka, Italian surfers know where to go and how to fit in. They are united by their affection for waves. The affection is persuasive — so long as you can smile at stiff-kneed figures in fluorescent green bathing caps.

Twenty kilometers north of Oristano, Capo Mannu offers some of the best waves in the Mediterranean. Powerful, long sections peel into the bay around this right-hand point-break. Best on a northwest swell; has been known to get double-overhead (10-15 foot/3-5 meter range). Beware the sharp rocky bottom and sea urchins.

Breaks either north or south of the port. A good right-and-left that works best on a west swell with size. Bottom is a mix of sand and stones. Good also for beginners.

A nice beach break with some of the most powerful waves along the wes coast. Very fast and can even barrel occasionally. Good even when overhead. Be careful of the currents.

45 minutes north of Rome. Considered among the most consistent spots in Lazio. Breaks both right and left over a reef. Watch out for the sea urchins. Can get crowded.