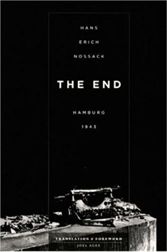 By Hans Eric Nossack, translated from the German by Joel Agee

The University of Chicago Press, 2006. 87 pages (with photos by Erich Andres).

In late July 1943, an Allied aerial flotilla (mostly RAF Lancasters) bombed the port of Hamburg round-the-clock for eight days and seven nights producing a 800-degree firestorm that razed the city and roasted alive an estimated 50,000 civilians, about a third of the Hiroshima toll.

The attacks, which preceded the Dresden bombings by two years (35,000 dead), went under the codename Operation Gomorrah. At the time, German novelist Hans Erich Nossack was in Gomorrah — vacationing on Hamburg’s outskirts with his wife — and this slender account, written in 1943 and first published in 1948, terrifies survival itself. “One must confess or forget, there is no third option.” Wandering into his vanished city — “the petrified surf of that sea of ruins” — Nossack confesses the aftermath with enthralled and disquieting lucidity.

But language abuts farce. The “incomprehensible” warps the rational witness. The event “has slipped away from the precincts of time” and is beyond avenging. Cars are “baked to a yellow ash.” Maggots are “the size of fingers.” Cats die from homesickness or shock. State propaganda is a bad joke.

Nossack’s Hamburg is a singular rendition of post-reality in which all things broken apart are made equal and memories stall on their own awe (“it was strangeness itself, is was the essentially not possible.”) Annihilation is a state of transcendent leisure, nearly banal (later Hannah Arendt’s loaded word), in which all is half-dead and the future wide open. “What we have gained and what has changed is this: we have become present.” The horror, the horror.