The End of Poverty 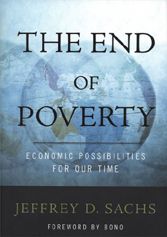 According to superstar economist Jeffrey Sachs, the scourge of poverty can be wiped out within two decades by providing developing countries a foothold on the economic ladder that enables people to help themselves, which they do. His Millennium Development Goals, adopted by the United Nations, offer the ways to implement a feasible, hands-on, global plan, reversing the policies of penny-wise, dollar-foolish governments which squander their insufficient funding, fail to honor MDG pledges, and back counterproductive measures rather than lasting solutions.

Citing Asia’s dramatic emergence, he targets the reasons behind the boom and explains why it’s not only a moral imperative but in the self interest of rich nations to systematically collaborate in aiding the Third World. Put this riveting eye-opener at the top of your must read list.