The Encyclopedia of the Dead 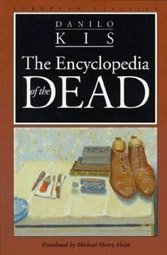 By Danilo Kiš, translated from the Serbian by Michael Henry Heim

Steeped in literature and drawn to intellectual mythology, Serbian Kiš (1935-1989) never met a chimera he didn’t want to ride or burrow into. That inclination shows in these nine stories, all poised on death’s cusp, either from life looking toward the beyond or the other way round. They are nine forays into metaphysical caves.

In the title story, for example, the visiting narrator finds herself in a Swedish library eagerly seeking the details of her father’s life as contained in the legendary “Encyclopedia of the Dead,” an arcane volume that allegedly contains the details every life’s pedestrian passage (“the sum of human destinies, the totality of ephemeral happenings…”) — a fictional conceit Kiš hit on after reading about the Mormon fascination with genealogy (the church still maintains an underground “International Genealogical Index” near Salt Lake City believed to total more than two billion names). The encyclopedia, like the historical odyssey it generates, is a meditation “on the transitory nature of human existence.”

In “The Book of Kings and Fools,” originally intended as an essay, Kiš plays off “The Protocols of the Elders of Zion” hoax to imagine the history of a similar book, “The Conspiracy,” whose message, repeated over decades, gradually infects impressionable minds in Tsarist Russia and Nazi Germany (“…men prefer the certainty of servitude to the uncertainty that comes with change.”) In “Last Respects,” a young nobleman faces an execution from which he believes, or seems to believe, he might receive a reprieve. But his hope meets the fate of most heroism: “History is written by the victors. Legends are woven by the people. Writers fantasize. Only death is certain.” In “Red Stamps With Lenin’s Picture,” the lover of a dead poet savages lazy layers of psychoanalytic criticism by establishing herself as the source of the poet’s more sensual writings. “I, sir,” she says, “am the ‘sinful parthenogenesis’…”

Kiš, like Jorge Luis Borges, traded in superstition while adding research enough to give his fiction an unsettling sense of academic accuracy. His work is that of a Balkan conjuror at home with secrets and whispering, giving him special agency in the swampland that was postwar communism.