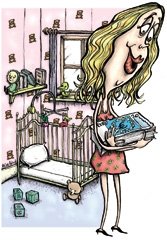 he pope would like me to have more kids. I read this not long ago in Italy’s leading daily Corriere della Sera. On “Life Day,” an obscure holiday that sounds like the brainchild of a Vatican flack, Pope John Paul earned a full page of print near the front of the newspaper under the headline, “Pope to the government: too few kids, help families.”

John Paul, flanked by little smiling girls, insisted the government needs “organic” policies that encourage people like me to get pregnant.

I say “like me” because I am the kind of person the pope says the future depends upon. I’m married, have a child and am deliberating whether to have another. Like 70 percent of Italy’s other parents who have just one kid, I am not sure my husband and I can afford to have a second.

The pope thinks it is a crime that having kids is such an economic hardship for families. He says that Italians and other countries with a low birth rate are on the path toward extinguishing themselves.

I’m not sure what the pope means by “organic” policies to promote birth, because the reporter never explains. Perhaps he means the government should legislate bailouts for parents or that birth control and abortion should be banned. That the pope wants to eliminate reproductive choice is hardly news. That he’d like to see economic intervention to promote procreation is interesting. It puts him in the same camp as many economists, the French government and Italy’s head of state, President Carlo Azeglio Ciampi, who recently said that Italy’s greatest problem was “empty cribs.”

My child’s crib is likely to remain empty when he grows out of it unless my husband and I can earn more money soon. It may remain empty even if we do manage to dig ourselves out of our current economic hole, partly because I don’t know whether earning money will be compatible with raising another child. If I get a full-time job, for example, it is hard to imagine not foundering if I am perpetually exhausted (the best case scenario) or absent for months or years at a time (I know people who have done this).

Indeed, I already face a competitiveness handicap that will likely endure my whole working life. I can’t work long hours. I can’t enrich my skills in off-hours. I can’t travel much.

My holidays are predetermined by the scholastic calendar. I can’t respond to unexpected demands from work. Yet a potential employer would have to tolerate unexpected demands on me from home. I will call in sick not only for myself, but also for my child and for any ripples in his day-care arrangements. I will be gone for recitals, teachers’ conferences and so on. I can only imagine how the handicap would grow with a second child.

Perhaps this handicap is what the pope laments when he calls for new “organic” reforms. Perhaps he’d like to see systemic incentives for fertility built back into our economy, ways for families to gain by having babies.

We had that kind of thing a century ago. Kids could be put to work for the family, harvesting crops or lending a hand at the mill. One can’t turn back the clock, thank goodness. But short of reintroducing child labor, systemic incentives for high fertility mean government protections and handouts of one kind or another.

Ciampi and others think that I need more flexible work options and better maternity benefits. They might as well brand my forehead with a scarlet “R” for “risk” to potential employers: If I’m not there for you, that’s your tough luck and you’ll have to pay me anyway.

I am sure Italy’s current maternity rights are behind at least some of inequality of sexes in the workplace. Why should anyone give us a position over an equally qualified male — much less equal pay or power — when we have the right to drop out for a year or more at any moment until menopause?

Incentives that are evenly distributed for men and women have some sense: big tax breaks for kids, for example, don’t penalize women more than men. But if programs are too generous, if they significantly add to the national debt, the economic drag they create will defeat their purpose. More than any economic incentive, parents need healthy economies, because they can’t afford kids without good jobs.

If I were easier to fire, I’d be easier to hire. If companies could halve two hour lunch breaks and employee holidays, productivity would rise. If national debt were slashed and real transparency fostered in all corporate and personal finances, then more capital would be invested in this country. And maybe it would be easier to find decently paid jobs.

Having said this, I also question whether a higher birth rate is intrinsically a good thing. The politicians and economists are concerned that an aging, diminishing work force fuels poverty: too many pensioners and not enough productive workers to support them. But this notion is based on a gigantic pyramid scheme. Our social security systems are creaky because they demand a certain ratio of young to old. The only way to achieve that ratio is through rapid population growth.

Politicians are battling unions and an aging electorate just to make nips and tucks to the current system. Yet no one seems willing to question the system’s rudiments, or entertain the idea that sustainability might need to be applied to our collective pocketbooks — that we might need radical restructuring that accommodates a population bust as well as a boom.

On an individual scale, a population bust seems well-advised. In my case, more resources will be invested in helping my one child thrive in a complex, modern economy. My husband and I will enjoy a higher standard of living. We are more likely to be able to take care of ourselves in our old age. When we die, our child is likely to inherit a larger nest egg. If having fewer children makes so much sense for families on an individual scale, how can it be all bad for society as a whole?