The Emperor (Downfall of an Autocrat) 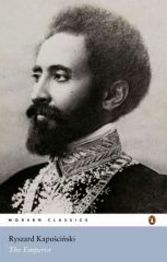 Here is what we learn about Ethiopian Emperor Haile Selasie in the opening pages: that he needed a Minister of the Pen to write things down; that he memorized loyal faces, mostly peasants promoted to keep court scheming intellectuals at bay; that he had 27 cars, including a Bentley; that he maintained a menagerie lions, panthers, and tigers (he had the lions killed when they failed eat coup-plotters alive in 1960); that he brought the first airplane into the country.

Kapuscinski is at his best in this after-the-fact narration: he never covered Ethiopia, arriving only after the emperor’s ouster in 1974. His peerless conceit is to tell of His Ineffable Majesty’s dethroning through the confessions of vassals and subalterns who are referred to only by their initials but explain the bureaucracy of “meanness and servility” in prose that is distinctly Kapuscinski’s.

These “retroactive” voices put the lovely and the grotesque in equipoise, absurd and ironic anecdotes told with deferential serenity. Starvation mentioned aloud is an insult (it is everywhere); student insurrection (the beginning of the end) is a desecration. History recounted this way averts parody only if speakers and their tales portray a credible chronology. Not a false step here. “Our Empire was barefoot, skinny, with all its ribs showing.” Just as suddenly gone.

While his throne collapses, His Ineffable Highness, King of Kings, 82, feeds his panthers and ensures his birds get their feed. Then, at the end of “the empty pantomime of ruling,” he thanks the military officers who come to take him away. He is alone in the vast palace except for one servant. And this isn’t a fable.