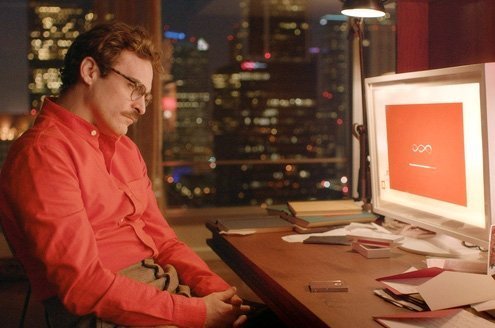 In a futuristic Los Angeles, Theodore Twombly, played by Joaquin Pheonix, falls for his operating system, but she’s hardly exclusive.
I

n 1996, researchers Peter Salavoy and John Mayer coined the term “emotional intelligence.” Later that year, Dan Goleman published a book by the same name. Around the same time, the Internet began taking off, and within a few short years most people in developed nations began to understand just what artificial intelligence could do for them.

The Internet and its intelligence promised us an easier life, and a smarter one. And it delivered. No longer do we need to remember dates, spend hours researching books in a library, calculate mathematical problems, or even go outside to check the weather. At our fingertips is all the information we need, and, for many, all of the social outlets they think they need as well.

But as smart as we’ve become regarding the retrieval of information, there are a catches. Some studies suggest our brains have become lazier and retain less of what they see. And what about emotional intelligence, which is defined as “the intelligence that helps us to feel, use, communicate, recognize, remember, describe, identify, learn from, manage, understand and explain our emotions”? How does the Internet assist with that? It can’t.

True emotional intelligence requires actual physical interaction. It means watching body language, hearing inflection, and picking up nuances that can’t be communicated with technology or emoticons. Artificial intelligence, as wonderful and insightful as it is now and will become later, has quite possibly made humans more fearful than before, and much less vulnerable — and less emotionally intelligent.

When you think about it, love, and human interactions in general are fraught with fears. The dread of rejection is an awful feeling humans will do anything to avoid. Let’s face it, we’re safe and powerful when we hide behind our gadgetry and vulnerable without it. If we’ve suffered hurt, we’re more likely to protect ourselves from more. It’s a normal human response. But the online world and artificial intelligence distorts that protective shell.

In 2013, writer and director Spike Jonze created the movie “Her,” which I consider among the most provocative, yet sad films I’ve seen in a very long time. In it, the main character, Theodore, played by Joaquin Phoenix, is again faced with single life after divorcing his wife. Lonely, he uses chat-room sex to satisfy his sexual needs. He also begins spending more and more time alone on his phone and computer. Introduced to a new and human-like computer operating system, he falls in love with “it,” Samantha, confessing that he’s “never loved anyone the way I love you.”

Yet Theodore is in love in a vacuum. There’s nothing real; there are no challenges. He’s intoxicated by his own euphoria, even though it’s directed at a make-believe person in virtual space. We’ve all felt that euphoria at one time or another, though most of us with other humans. Theodore no longer needs to touch a woman, or feel vulnerable. His fear diminishes. When Samantha asks him about his relationship with his ex-wife, he turns melancholy in describing how wonderful it was. “In our house together,” he tells Samantha, “it was a sense of just trying stuff and allowing each other to fail and to be excited about things.”

But failing is no longer an option for Theodore. He protects himself from that pain.

Later on, Theodore will discover that Samantha is also a love mate to 641 other people.

The movie had me pondering how many of us have become our own operating systems. Afraid to fail, many of us now have relationships based solely on text messages and chat rooms, sometimes never seeing our lovers’ face in real life, pushing aside the complexities of male-female relationships. How many of us, I wonder, are losing the ability to develop our emotional intelligence and putting the artificial in charge?

And speaking of artificial, the real life sex doll trade is booming as well. So much so that in 2014 the Pew Research Center released a report predicting that robotic sex dolls will be “commonplace” by 2025. Curious, I visited one of the most popular sex doll websites, where one customer testimonial read, “I enjoy having a glass of wine while admiring her sitting nude on the chair.” The “her” in question has no language capability and runs a cool $10,000. That may be cheaper than a relationship, at least over time, so it’s no surprise a doll might make sense to those uncomfortable with social interaction. They’re paying to keep emotional vulnerability out of the picture.

Again though, with proliferating sex dolls and toys, sophisticated social media, and online-only relationships, what’s the fate of emotional intelligence? Will we become artificial? Or will the pendulum swing back toward the center, by which I mean artificial intelligence used as it’s meant to be used, to gather information?

The artificial intelligence genie is out of the bottle to stay. The real question is just how smart it is in the hands of the humans that mold it.