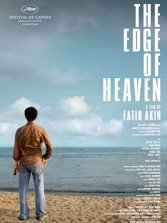 A “new Europe” film — and a very fine one — in that the characters bridge Turkey and Germany, which have grown culturally, emotionally, and sexually intertwined since the mass East-to-West immigration of the 1960s. German-born Turkish actor-director Fatih Akin transforms six people (two Germans, four Turks) into cultural billiards, reckoning with dilemmas that collapse class, status and nation.

Akin is keen to make movies that do away with nationalism when it comes to the hard life; heaven’s edge this is not. Instead, it is a running chronicle of cultural complication (the film’s springboard is the decision by a Turkish-German professor to have Turkish prostitute move in with him). The wheel-within-a-wheel lesbian relationship, between the daughter of the prostitute and the daughter of a 1960s radical brings the power of Hannah Schygulla (as the former radical) to the forefront. She was Werner Fassbinder’s diva and age has only ripened her sumptuous talent. Won best screenplay at the 2007 Cannes festival.