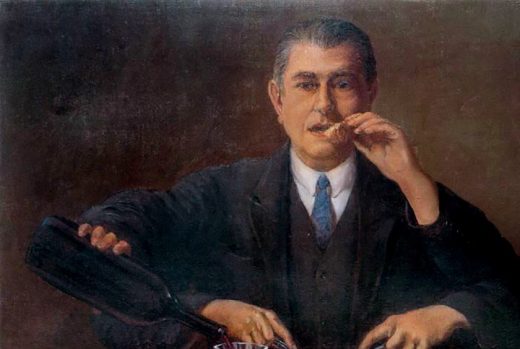 Food can emerge from unexpected sources… "The Magician (Self-portrait with four arms)," by René Magritte, 1952.
M

ost people around the world think they have a pretty clear idea of what constitutes Italian food. Many can even list its staples. But there’s an entire universe of Italian ingredients and dishes that are well out of the ordinary. At first glance, some of these concoctions might appear odd, if not off-putting. Yet some of these dishes, seen by skeptics as quirks, are often beloved and quite surprisingly palatable.

If it’s true that one man’s weird dish is another’s delight, then it shouldn’t surprise anyone that Italians regard pizza with pineapple as a joke. At the same time, Italians can also stray from their ubiquitous meals of pasta, pizza, and tiramisu. Geographically speaking, Rome is the city with the highest density of foods, boasting a share of local offerings (braised oxtail, lamb intestines, fried brains, and sauced up tripe). But Tuscans have their lampredotto (slow-cooked cow stomach stuffed in a sandwich and dressed with green sauce, or salsa verde). In Palermo, a common street food — beyond arancini and panelle — is stigghiole (grilled intestines on a stick) and pani câ meusa (chopped spleen and lungs of veal that have been boiled and then fried in lard).

. Snails have a delicate, but defined taste, which can be emphasized (or covered.)

Italians of all regions love their snails—both the marine creatures called scungilli and larger escargot-style snails. They’re also fond of tiny lumachine, usually braised in tomato sauce. In Sicily, these are called babaluci, where they are commonly found in farmers’ markets, often slowly inching their way from the sales counter, but ultimately, too slow to flee. Snails have a delicate, but defined taste, which can be emphasized (or covered) by the herbs used to cook them. Their slippery, chewy texture is, perhaps, what most bothers people.

Then we enter the realm of pork and cured meats. This is where it gets weirder. Think coppa di testa, also known in some areas as soppressata, which in English means “head cheese.” Made with many of the pig’s sinewy and collagen-rich parts—but mainly its head— this textured, cooked salami is mixed with spices such as cinnamon and pepper, along with aromatics like orange zest. Coppa di testa is eaten finely sliced and served alongside more mainstream cured meats and cheese on the antipasto platter.

Still in the swine world, the popular proverb, “del maiale non si butta niente,” meaning that every part of the animal is edible, holds true even for its blood. Popular in Campania and Basilicata, as well as in Liguria, during Carnevale is sanguinaccio dolce, a dark chocolate pudding made with pigs’ blood. This local delicacy is commonly cooked down to form a dense and sweet, slightly iron-tasting spread that’s enjoyed with chiacchiere, the holiday’s typical fried pastries. The savory version—sanguinaccio insaccato—is basically a blood sausage with assorted spices and milk (only in Liguria), or chopped potatoes and bread (only in Piemonte).

In the swine world, the popular proverb, “del maiale non si butta niente,” meaning that every part of the animal is edible, holds true even for its blood.

Walking down the cobbled alleys of the centro storico in Naples, travelers may come upon the many stalls that display and sell ‘o pere e ‘o musso—the pig’s foot and snout. These are boiled and chopped into small pieces, and then served sprinkled with sea salt, lemon juice, spices and lupin beans. This poor man’s street food dish holds P.A.T. (prodotto agroalimentare tradizionale) designation, which means it’s officially recognized as a traditional culinary product of Italy.

But there’s more, beyond the pork.

‘Mpanatigghi are a sweet biscuit from the Sicilian town of Modica with a surprise ingredient.  These crescent-shaped biscuits are filled with a delicious mix of the area’s rich and unique cold-processed chocolate, as well as spices, chopped candied fruit, cinnamon, nutmeg, sugar and ground beef. Not a typo. The name suggests that the perplexing but delicious chocolate-meat ‘mpanatigghi may derive from Latin American/Spanish empanadas. They taste chocolatey, yet there’s a hint of savory that’s pleasant and different. Definitely worth a try.

One of the more modern delights in the Italian strange food kingdom is the hugely delicious maritozzo salato – the savory version of the classic Roman oval brioche sliced open on a slant and filled with whipped cream. The best savory maritozzo are in Rome, at Caffè Roscioli, where they are filled with creamy baccalà mantecato and raspberry jam. Don’t wince; it’s mind-blowing.

Lovers of gelato and interesting flavor combinations will love the signature trademark rosemary, honey and lemon gelato at Gelateria del Teatro in Rome. Other popular flavors at this establishment are the house peach and lavender duo, and the garden sage and raspberry mix.

And don’t even get me started on Casu marzu, the prized live maggot-infested cheese from Sardinia. That would turn a feature into a book.