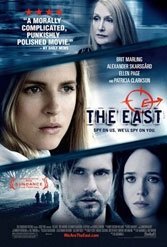 Former FBI agent Sarah Moss (Brit Marling) works for a Washington-based counter-terrorist boutique that sells corporate intelligence to the highest bidder. She’s a Christian with a boyfriend and a life. Her going specialty is eco-terrorism, Black bloc-style, imagined here as a coven of 21st-century Hippies who disrupt the homes and lives of heartless multinationals, reining havoc on their cash-cow CEOs and promising worse to come. Sent undercover to infiltrate an anarchist collective known as “The East,” Sarah does so ably, eagerly even, but eventually (and predictably) finds herself torn between sudden revulsion for multinational mobsters, the big bad boutique she serves, and the eco-terrorists themselves, who (again no surprise) are portrayed as decent souls with feelings and valid gripes.

Zal Batmanglij’s soft-core agitprop is slow, often awkward, and intellectually unsatisfying for its reliance on the obvious. The film’s few nuances belong to the collective, whose cult-like leader Benji (Alexander Skarsgård), peddles slogans (“We are the wakeup call…”/”Revolution is never easy…”) and Jesus-like looks, which are perfectly suited to Marling’s uncanny Mother Mary face. Though Sarah is grudgingly adopted into the group’s communal-style core, she’s increasingly burdened both by her confusion and her growing affection for Benji. As a result, both counter-terror boss Sharon (evil-faced Patricia Clarkson) and rebel Benji turn suspicious.

The clumsy premise sticks Marling and Skarsgård into wooden, one-note roles they’re can’t escape. Benji exists to embody the nobility of the eco-cause, Sarah to suggest a more civil way of challenging multinational abuse. The weight of the propaganda pedal finally sinks what little credulity Batmanglij has to offer (perhaps because Batmanglij and co-writer Marling spent time among collectives in their penniless days).

The East includes one-dimensional Izzy (Ellen Page), who spends most of her time scowling or snarling (no wit allowed), before finally feeling for her CEO father, and Doc (Toby Kebbell), an understated doctor poisoned by a “legitimate” antibiotic. Doc, by far the most intriguing character, is soon set aside. “Why is it,” Sarah asks Benji, “that self-righteousness goes hand in hand with resistance movements?” A better question might be, “Why are scriptwriters compelled to turn to blacks hats and white when most global stories are the sum of many shades of grey?” No answer here.