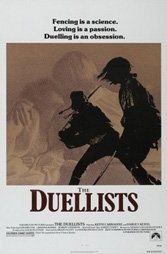 The most attractive aspect of Ridley Scott’s stylish first feature is how it quickly exposes the conflict at its core while maintaining suspense throughout. Armand d’Hubert (Keith Carradine) and Gabriel Feraud (Harvey Keitel) are young Napoleonic cavalry officers, so-called Hussars, one an elitist, the other a working class bully. Inadvertently brought together, the tempestuous Feraud decides the two men should be formal adversaries, their class squabble amplifying into an enmity that sees fanatical Napoleon loyalist Feraud repeatedly demand that the more reserved d’Hubert do battle with him in series of duels that last the arc of Napoleon’s rule and beyond.

D’Hubert is a proud aristocrat wedded to restraint (“a chivalrous half-wit,” says his general), Feraud an obsessive warrior-provocateur who lives to insult, and fight. They’re ideally matched because both the men and their class worlds couldn’t be more different. What doesn’t differ is their willingness, one openly, the other reluctantly, to parry and to thrust, a complication of 19th-century duty and protocol that Joseph Conrad had in mind when he wrote the only partly fictitious short story on which the film is based. Here is extremism (Feraud and Napoleon) pitted against propriety (d’Hubert and chivalrous values) with honor as the catchall lubricant.

Scott is less interested in the bravura of his actors than the spirit of their fighting, and it shows. Lean Carridine’s weary d’Hubert and burly Keitel’s adversarial Feraud are destined not to understand each other. “You must think of yourself as fighting on parade,” an aide tells d’Hubert, and despite his perplexities he can’t shirk the task, nor will Feraud relent.