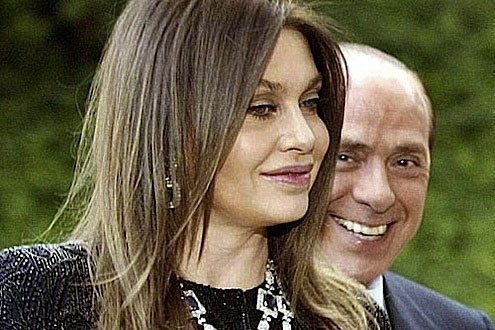 t the moment of her deepest distress, here’s what Veronica Lario’s could have done to legitimately establish a nonpartisan claim to a nonpartisan complaint.

The only wholly unsound and capricious choice was to deliver an astringent note to the one national newspaper known to loathe her husband, Silvio Berlusconi, and the one most likely use her sullen arsenic as a claxon against the Ancien Régime’s conniving little tyrant.

This was the only choice sure to discredit her efforts.

It’s also the choice she made.

Days after Berlusconi’s angry wife mugged her self-indulgent husband, two thirds of Italians booed her decision. Why? In part because she crassly violated a central rule of bella figura, you don’t publicly humiliate your husband — whatever’s he’s done. First, you swing hard up close and personal. If it matters to you.

Another faction predictably considered Lario’s attack political. Why else turn over a personal quarrel to La Repubblica, whose dislike for Berlusconi over the years has been unstinting.

Yet another contingent marveled at Berlusconi’s instant damage control by issuing a snappy, alert, well-worded apology with hours of the event, immediately depriving it of oxygen. (He was livid, of course, but didn’t let it show.)

The BBC, like other Anglo-Saxon outlets eager to capitalize on a pseudo-celebrity news story, soon found itself with a non-starter. Its web site carried a saucy piece about his “long-suffering” wife that included comments from psychologists and marriage counselors.

Which led a woman named Michelle to write this:

“I found it wonderfully romantic that he admitted he was wrong and apologized in public. Of course he’s an idiot for behaving in that way in the first place, but he had a lot of guts to openly say ‘I’m sorry; I’m an idiot; I love you.’ What British man, let alone politician, would do the same — and with such flair?”

Another reader, a teacher named Barry Kirby, asked the BBC for a full, translated copy of Berlusconi’s apology, “so when I have to make students write a letter of apology to staff I might give them a copy.”

Michelle and Mr. Kirby don’t necessarily constitute a majority, but publicity-happy La Repubblica itself revealed the results of an outsourced telephone poll of 1,000 Italians: 55 percent slammed Lario. Only 37 percent of women backed her, with detractors suggesting she’d used personal enmity to do political damage. The gesture, far from woman-scorned outrage, was electoral subterfuge disguised as a hissy fit.

Lario, they suggested, was in over her head — itself a sexual cliché, but cliché is the mortgage a society pays on some traditions.

Ezio Mauri, La Repubblica’s editor, defended publishing the letter on page 1 because, he declared, the incident was tantamount to Hillary demanding an apology from Bill way back then. Again, the flaw in logic is the partisan tick of his paper. Hillary would have issued such a demand to all outlets, not one.

The New York Times, liberally quoting peripatetic Italianist Beppe Severnigni, swung between camp and crass. “Perhaps all marriages are mysteries on some level,” wrote its correspondent, with Severnigni labeling Berlusconi “a walking oxymoron” because he “embodies the Italian dream of being everything, of pleasing everyone (and indulging himself in everything), without giving up anything.”

Honestly, Berlusconi embodies only Berlusconi, a baronial anti-modernist who has little in common with most Italians (if “most Italians” even exist) except that he cares marginally about rules and answers only to himself. Larger-than-life because he’s smaller than most, he is Italy’s walking antidote to political narcolepsy. Even his flirtatious insinuations are so absurdly unabashed that male intellectuals (including Severnigni) giggle and stab at them unconfortably lest they’re compelled to admit to sharing the same tickling, but under radar.

The Washington Post rightly noted Italy’s “fondness for politicizing everything” and its embrace of “celebrity gossip,” but left out that such gossip has lately fueled most American political campaigning. The Latin is now the global. The day of the Lario spat saw aspiring Democrat Joe Biden, the newest entry into the American presidential race, apologize for calling Barack Obama “the first mainstream African-American who is articulate and bright and clean and a nice-looking guy,” a non-malicious bit of poor phrasing that immediately aroused media meat-hounds. Bad public speaking (thank you, Mr. Bush) has revoked literalism’s free ride — though Biden can take some solace from 1968 Democratic maverick Eugene McCarthy. He was known as “Clean Gene” and no one at the time assumed he’d taken lots of showers.

What’s lamentable in the Lario incident is that it’s more salient aspect, inter-marital respect, is already on the scrapheap.

Here was a long-silent woman perfectly positioned to blow a loud whistle not only on family values hubby B. but on all men who egregiously avoid their wives and manipulate status into (septuagenarian) virility. They flirt not necessarily to conquer but to reassure themselves they’re desired and in a position to pick from among adoring and ambitious acolytes, or “pretty young things,” an English, not Italian, turn of phrase.

Instead, she either consciously or stupidly preached to the provincial choir, which was more than glad to use her and spit out the rest. La Repubblica has moved on. So has the global media. The furious old man outsmarted the predators on this one day.

And judging from the Michelles of the world, he also got the girl.