The dress in the attic 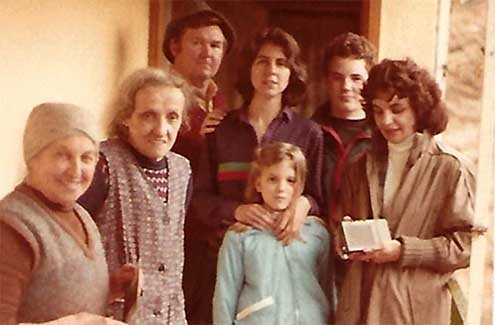 The author, center, flanked by her mother, meets the family in Frazione Braida, a hamlet outside Turin, in 1985
M

y mother never drew up a will, but about a year before she died, she told me to hold onto a few family heirlooms she’d stored in the attic: her Croatian great-grandfather’s tin cup and trunk, and her Italian great-grandmother’s dress.

Recently, my stepmother found the dress — “White cotton, short and wide,” she texted me.

I knew Grandma Braida had a wide reputation. In one legendary picture, she sat in a big armchair, taking up all of it. She had deep creases in her olive skin, and warm brown eyes that communicated the English words she lacked. In my mother’s high school graduation autograph book, she wrote: Tu sia una belisima figlia, e brava. Ti voglio bene. Tua granma, Marietta Margherita Braida.

In 1899, Grandma Braida emigrated to the United States with her husband Dominic and their three-year-old daughter, Anna, my great-grandmother. Via Ellis Island, they made their way to Southern Iowa, and opened a grocery store. Grandma Braida died, they said, of a “stomach ache,” eating only mashed potatoes and milk in the end. No one called it cancer back then.

My family visited Grandma Braida’s village in Italy when I was nine years old. About 40 minutes north of Turin, near the French border, the hamlet, called Frazione Braida, was named for the family. When we got there, two elderly ladies waved us down with a chorus of Si, si, si. Sisters, they were also cousins of my great-grandmother: Angelina was as plump and chatty as Sandrina was skinny and silent. Neither had married and they seemed like two halves of the same heart.

Their dwelling was simple, with goats and chickens in the front yard, and a little dog like Toto who trailed behind. The stairwell of the three-story house was outside. But the center of the house was the kitchen, with a low ceiling from which big silver pots and pans hung. They served us hard, bittersweet cookies that looked as delicate as doilies, and Asti Spumanti that stung my throat. The weather was overcast, making their house feel like church on a rainy day.

My mother, who was technically only a quarter Italian, but identified most with her Italian ancestry, was ecstatic to be there. She recorded the sisters’ every word, and cried when we left. Italy scared me, and I couldn’t wait to leave.

But on the car-ride to Switzerland, I spotted something that felt like a premonition, an eerie foreboding that reminded me of Italy itself. In the rear-view mirror, I noticed my very first pimple. I panicked thinking that puberty was on its way, which meant getting breasts and my period. Mostly, it meant becoming my mother, who was loud and emotional like her Italian ancestors. I was quiet like my dad and his English relatives, and I wanted to stay that way.

Ten years later, I came back to Italy on my own. The second trip was nothing like the first. From the moment that I stepped off the train in Rome, I was smitten: by the palm trees and colorful buildings, the lively language and foods with pungent, earthly scents. After a few months, I took the train north to visit Angelina. Her sister had died. I wasn’t yet fluent in Italian, but I’d learned enough to understand Angelina’s stories of family members, told with dramatic flourish and hand gestures. She fed me risotto for dinner, and I slept in the bed where my great-grandmother was born.

That was the last time I saw Angelina, and the last time I went to Frazione Braida. A few years later, after college, I came back to Rome, staying for several years in an adventure that had much to do with becoming a woman and seemingly little to do with my ancestors.

But I do sometimes wonder if my connection with Italy has something to do with my blood. I became fluent in Italian, which brought out another person in me — someone I might have never discovered, or dared to be, back in the U.S. I became more emotional, expansive, playful, and yes, a little louder — so, more like my mother.

Though my mother’s later illness eclipsed my time in Italy, I’d lived there long enough to realize that I’d already become more like the woman that I’d once resisted.

I’m glad my mother told me to keep Grandma Braida’s dress. My aunt recently asked me if I would transform it into a baby gown for my daughter, who is due next month. I quickly said no. I already speak Italian to her in my womb, but Grandma Braida’s threadbare dress should be kept intact — like the ancestral thumbprint that it is.