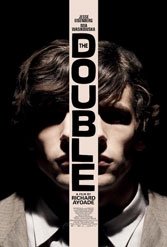 British music video director Richard Ayoade merges Wes Anderson’s sense of oddity and Terry Gilliam’s retro wackiness and emerges with an idiosyncratic spin on Dostoyevsky’s novella, framed here as a story about an lonely and awkward worker bee employee (Jesse Eisenberg) stuck in a vaguely parallel universe and suddenly compelled to come to terms with his far more self-assured doppelgänger. The collision — Simon James meet James Simon — somewhat obviously reveals the competing sides of every soul: passive vs. aggressive, shy vs. hedonistic, self-protective vs. self-destructive. Ayoade’s trick is to push his story into a lunatic Gothic kaleidoscope chock with visual quirkiness (call it Imperial Communist Weimar). He also inserts an ambiguous but flat love interest Hannah (Australian Mia Wasikowska) that Simon James fumbles with but James Simon conquers, and entangles the result in postmodern twenty-something angst. The effect is that of being stuck in a protracted and nightmarish adolescence.

Hard as Ayoade tries to spike his story with eccentricity — both Simon and James work in a militarized, bureaucratic maze for a dictator-styled chieftain known only as “the colonel” — the clashing doubles are little more than slaves to their bizarre trimmings.

Moral of the story: beware wannabe cult films in which the lights keep flickering: that’s the kind self-conscious noir contrivance that can make a good story too cute for its own good (despite eye treats borrowed from Gilliam’s 1984 “Brazil.”) “I’m a bit of a non-person,” says meek Simon, which bold James tries to disprove. There are also a few gratuitous mentions of regression therapy, apparently to hammer home the notion of a film-long trance.

In the Dostoyevsky novella, shrewd Golyadkin Jr. eventually takes over naïve Golydakin Sr., exposing the dimensions of human schizophrenia. Here, Simon literally cancels out James, which is the only remaining rabbit hole what is an alluring but tedious undertaking.