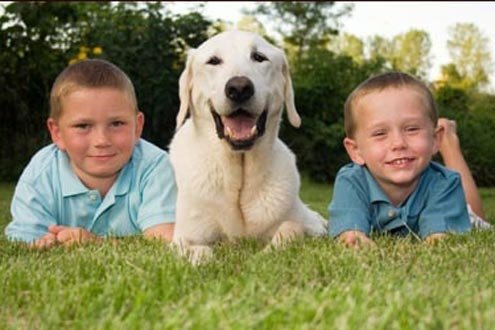 Once you bring a dog home, "extracting" it is painful.
W

hat’s wrong with me? That’s a loaded question which you don’t need to answer. I can’t. This column isn’t long enough.

Clearly I’m far from perfect, but I do like to think that I give parenting my all. I’ve been known to bust out some crazy arts and crafts. I am oft to read books using several different voices and dramatic flare. I make cookies and sometimes hide veggies inside my famous meatballs. I play nursemaid, housemaid, and sometimes the maiden who needs rescuing from the fiery dragon’s lair.

That was me and my horn.

I’ve also been known as a “Screamy Mimi,” with enough emotional intensity to belt out, “No wire hangers!” — “Mommie Dearest”-style (though I’d never use them).

This winter, because of lack of sunlight and my own laziness, I’ve let my kids increase their video time to shameful levels. There have also been way too many hot dog, pancake, and pizza dinners lately.

No toot, no horn.

Note: My mommy decision-making is sometimes based on images of my boys as adults, sitting on a couch talking to their future shrinks. Let’s face it: I’m their mother. So they will have shrinks (or maybe become shrinks). Then I think, “How can I avoid being the root of their problems?”

But this week, I made a grave parenting error. It was much bigger than too much screen time and much more damaging than cookies for breakfast. I did something that I’m quite sure they’ll talk about during cognitive therapy in 2025.

I brought home a puppy. And after 12 hours, I sent that puppy a packin’.

Again, what’s wrong with me? What was I thinking? They say the road to hell is paved with good intentions, and I can tell you that after listening to my three-year-old sob for 30 minutes, it is.

I’d been considering getting a dog because my kids wouldn’t stop begging for one.

I had reservations. I grew up with many dogs, but loved only one, “Freckles Dugan,” a very special Springer spaniel. But this isn’t about her; it’s about me (have you noticed all the first person singular pronouns in this piece?) When Freckles died she shattered my foundation. I never truly loved another domestic animal again.

Last week I was minding my own business when I met a friend’s dog. A rare hunting breed from Sicily, this dog was beautiful and affectionate. She must have been a gay man from Manhattan in a former life because she really took to me.

And if there is one thing I like in another living thing, it’s when they like me. So I liked her right back. She rested her snout on my leg, I caressed her white fur and our love affair began.

Innocently I commented, “This is the kind of dog I could take home with me. I love this dog.”

“Take her! Take her!” my friend exclaimed.

I had no idea she was looking for a new home for the pooch.

“Oh, I couldn’t.” I replied. But my head was drunk with puppy love and after 30 minutes I’d convinced myself that this bitch was my destiny.

The next day, she is all I can think about. I phone my friend who suggests a trial arrangement. We pick up the hound.

My son Nicolo says, “She is a dog super bianco!” in his mixed language. “I love her!”

My other son Leonardo says, “And she loves us.”

My heart melted. It was a tender family moment that a mother lives for.

But once we got home, love at first site was stymied by puppy comportment. She pulled on the leash, jumped on the kitchen counters, peed on the hardwood floors, chewed up plastic dinosaurs and cried when left alone in the garden. In summation, she was like having a new baby — or worse still, a toddler. Toddlers are tricky. They’re mobile creatures that lack good judgment, have a copious amount of excremental product and need to be watched 24-hours a day.

My stomach felt sick as I watched my kids play with the dog, becoming more attached with every passing moment. I’d made a huge error in bringing the dog home.

Deep down, I didn’t want to admit it. Or admit I was going to fix the mistake by taking the dog back, thus pulverizing my kids’ hearts.

I told my kids the dog missed her mommy and that she wanted to go home. They screamed and cried and asked for the iPad and some ice cream.

Looking back, I’m pretty certain I created a surefire future therapy moment. All I hope is that if my sons get an aversion to white women as they get older, they blame the dog they called Super Bianco, and not me.