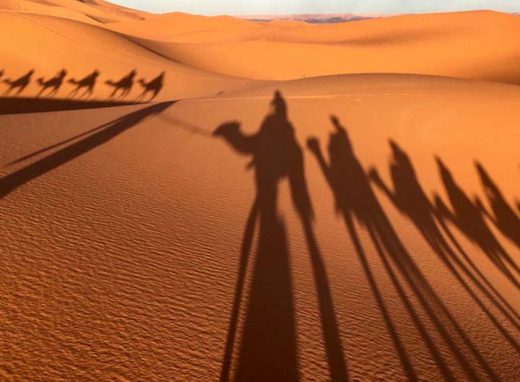 Images of the pristine, exotic Sahara are dominant in the imagination.
I

t was nearly 10 years ago that I first saw the Sahara Desert. I was traveling through Morocco at the time and it appeared before me – vast, open, and deserted (or nearly so). Occasionally I’d see a small Berber settlement with goat wool tents staked firmly down at their corners. The nomads took shelter in their tents, while their camels lolled nearby.  In the distance, there were verdant oases.  In contrast to the desert, their royal palms, grass, and vegetation was startling. These small details, taken together, were a key part of the cultural and geographical landscape I’d looked forward to experiencing before beginning my trip.

What I didn’t count on were the blue plastic bags billowing off the desert in waves. Hundreds of them scattered and swirled like some eccentric North African crop, sprouting tumbleweed-like from the ground.

“People start pollution. People can stop it,” said the narrator of the ad I watched in the 1970s. Really?

Stranger still was the tour guide’s unwillingness to acknowledges them. He’d apparently become accustomed to them. When I pointed, he simply shrugged, an indifference I found disconcerting.

Further along, in the village of Chefchaouen, I walked along the river that ran through the blue whitewashed town. There I saw women sitting at the water’s edge, a basket of clothes beside them. They cleaned this laundry on a washboard, rinsing and wringing garments in the flowing current. I watched them in quiet admiration. But looking further upstream, tangled in branches, I saw clusters of plastic bottles, more bags, and an assortment of rusted cans. Again, no one seemed to see this as unusual. It was just part of the scenery. Again, I felt disheartened. How odd to clean clothes in a dirty river.

As a child in Ohio, I remember watching a TV public service announcement aired by an organization called Keep America Beautiful. It ran for a decade starting in the early 1970s. In it, an American Indian in a birch bark canoe paddled along a forest stream. Slowly, he came across pollution from factories and industries. There was floating trash, paper cups, and newspapers. Once at the shoreline, he found it littered with debris. In the last scene passengers in a passing car tossed trash out the window, and all that rubbish came to rest at his feet. The Indian then turned to the camera zoomed in on his face. A single tear rolled down his cheek. “People start pollution. People can stop it,” said the narrator of the ad I watched in the 1970s.  Really?

The defiling of a once pristine land left a deep impression me. Walking barefoot as a child, it hurt me to see cigarette butts and beer can tabs on the side of the road. I’d always pick up trash on my walk to the corner store or on my way to my friend’s house. It’s just what you did.

The real Sahara, at least in some places, resembles a litterbox.

When I first moved to New York City, I still felt that sense of conscientiousness. On my way to the subway, I’d stop to dispose of stray plastic bottles and took them to the receptacle.

But sometimes things grew more complicated. Should I approach the teenager who’d just dropped his chip bag on the ground? Or would doing so make him defensive and more likely to do it again? There was also a chance he’d become belligerent.

Gradually, I began to accept that some problems were bigger than my good will’s ability to contain them. And if I picked up every straw and plastic bottle I saw I’d never get where I was going. The city picked up curbside trash and cleaned the streets, I reasoned. It was their job. Random trash was just part of the city landscape, I conceded. Soon, I stopped noticing it at all.

In this way, I became an inured citizen of my messy city. Like the tour guide in the Sahara and his unnoticed blue plastic bags. Like the women washing clothes in a dirty river. Once stunned by how much humans can ruin their surroundings, I have since become desensitized and accustomed to the world as it is.

When I watched that public service announcement of the 1970s, the one tear shed actually gave me a sense of hope. Repairing the damage was just a matter of good will and collective effort.

Many years later, I’m not so sure.