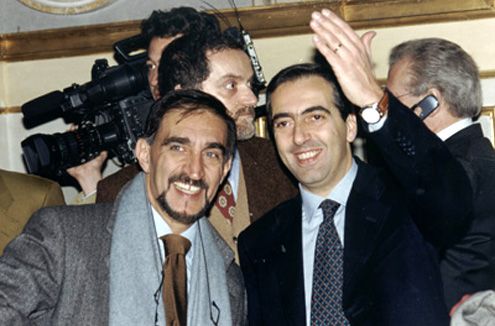 or two decades now, I have failed to convince Italian friends that I not a natural convert to their political right. Somehow they think my traditional style and my political background as an economically conservative (free-market liberal for Europeans) but socially liberal Rockefeller Republican background translate into enthusiasm for Silvio Berlusconi and his right coalition Popolo della Libertà.

My failure explains why I was recently invited to a Milan dinner party at which the honored guest was Ignazio La Russa, parliamentary leader of the Alleanza Nazionale (AN) party, the softened descendent of Italy’s former Fascists. AN joined Silvio Berlusconi in hope of winning Italy’s imminent general election.

I have always found La Russa’s personal aura disturbing, but good manners, friendship and the prospect of a lovely dinner won me over and I went.

Despite my misgivings, little-improved by sharing Sicilian specialties in a handsome setting, La Russa impressed me as a serious political professional. His obvious respect for parliamentary democracy’s process and limits surprised me, considering his laughing reference to his origins as a “thug” in Italy’s violent 1970s political clashes. His lifelong dedication to his ideas, regardless of their popularity, contrasts with the blithe opportunism of relative newcomer Berlusconi.

La Russa’s talk did not convert me. But I discovered why abortion and Alitalia have shouted down more consequential issues, such as labor reform or Italy’s abysmal performance in European league tables from education to competitiveness, and why I am not a natural right-voter.

The novelty in this election is “bi-partisanship,” or cobbling together two coalitions from Italy’s colorful multitude of parties. Both major players, Silvio Berlusconi’s Popolo della Libertà (right) and the Partito Democratico (left) lead by Walter Veltroni, must simultaneously fight for the center and also rein in fractious allies. On the left, being against Berlusconi may be cohesive enough to paper over the differences in Veltroni’s coalition. Berlusconi, however, enjoys no such luxury. Aside from its leader’s personality, little has unified it since the Communist Party disintegrated after 1989.

La Russa’s chat illustrated this perfectly. For while he and the dinner guests take victory for granted, he was unable to answer a guest’s request for a definition of the right’s identity and purpose.

The best he could do was quoted Sarkozy on “respect” and note that the major American parties gather in many currents.

The Sarkozy reference may have made the dinner guests cheer, but it is not a coalition-forging message. AN’s allies have not done much better. Berlusconi’s slogan “Get Italy off its knees”, while acknowledging Italy’s bigger problems vaguely echoes nationalistic rhetoric from Italy’s Fascist past, which remains a delicate legacy, despite repudiation. Another ally —separatist Lega Nord — has posters featuring a Sioux warrior and caption “They suffered immigration. Now they’re on a reservation.”

Enter abortion and Alitalia. Neither is a new issue, nor necessarily a demonstrable concern of the electorate in general. But both are well-suited to uniting the right.

Calls for limits to Italy’s abortion law guarantee support of the Church and its capillary organizations. Abortion also has a track record as a for-or-against issue for America’s right. Dramatic incidents such as the suicide of a physician who performed abortions play well on Berlusconi’s sensationalist television channels and permit emotions to dominate facts, to wit Italy’s abortion rate is relatively low and has dropped 40 percent since legalization in 1975. Berlusconi positively relishes predictable opposition from feminists and leftists which evoke clear-cut pre-1989 political battle-lines

The Prodi government has been seeking a savior for loss-making Alitalia for over a year, and it is not a new issue. Even Berlusconi himself (out of government and never disturbed by conflicts of interest) could have joined numerous suitors — including Italian Air One — who have either backed off or been rejected. When an Air France deal looking possible, Berlusconi suddenly sounded off on the family jewels theme, claiming he had a (still) unspecified group of Italian white knights.

Alitalia is an excellent unifying issue. La Russa’s claim that Italian producers are uneasy about having foreigners transport their products manages to be nationalistic and avoid the delicate legacy. Pledging to prevent foreigners from firing thousands of workers guarantees (leftist) union support. And then there is the common perception that, under Italy’s spoils system, Alitalia is Alleanza Nazionale’s…

Banker and entrepeneur dinner guests challenged La Russa on the thousands of workers Alitalia must lay off. He declared this politically impossible and economically irresponsible. Reminded that Ronald Reagan and Margaret Thatcher began two decades of philosophical and economic change by standing down the airport controllers and miners, La Russa changed the subject.

Alleanza Nazionale’s reluctance to leave Alitalia to its free-market fate is not surprising. Until privatization, Alitalia belonged to state holding company IRI, which Mussolini established in 1936. The economic policies of Alleanza Nazionale’s Fascist precursors were statist and collectivist. Nor is Berlusconi’s own business record a model of conservative Anglo-Saxon free-market capitalism.

La Russa and the Italian right may see themselves within broader late twentieth-century’s conservative movements — La Russa cited Aznar as well as Sarkozy — but their coalition will not make the Reagan-Thatcher gesture that Italy’s sclerotic economy needs. Moreover, they neither share the coherent and abiding economic vision of Reagan and Thatcher; nor do they offer their own.

Instead, Italy’s right defines itself by its position on two issues it thinks will solder its coalition. The position is state interventionist and socially conservative. That is why I will not vote for the right, even if I will accept invitations its nice dinner parties. If I ever get another.

— Madeleine Johnson is the author of The American’s monthly “Quadrilatero” column. She is also a freelance writer. Now a dual national, she voted for the first time in Italy in April.