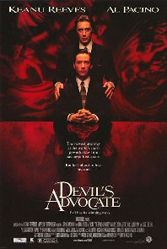 You get the picture — or think you do. Director Taylor Hackford’s movie is rapaciously intelligent and boundlessly energetic. While Pacino’s soliloquies steal the show, Reeves, Theron, and Connie Nielson (lascivious Christabella) are all classy. By far the slickest Satanic flick of the 90s and in the running for an all-time top-10 slot.