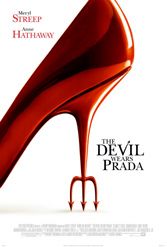 Though rolled out as a snazzy romantic comedy about coming of age and coming to terms (from Lauren Weisberger’s snarky novel), David Frankel’s movie is actually product placement for the 21st-century Cinderella. It mocks loyalty, repeatedly tells you size matters (for women), and puts a basic premium on moral and social conformity. Ruthlessness, meanwhile, is excused either to fashion-comes-first professionalism or “oops, just trying to be funny…” It’s not.

In a nutshell, Hathaway is ambitious Andy, who wants to be a NYC journalist but ends up in the hands of fashion mag superstar Miranda Priestly (Streep). The rest are set pieces affirming Streep’s deadpan meanness and Hathaway’s toothy good looks in designer labels. The problem with such an abundance of me-first glitter is that the characters have no gold. What you get instead is vaguely contemptible fashion industry rehash made worse by a deadbeat script that corrupts wit into cliché.