The Devil in The Hills 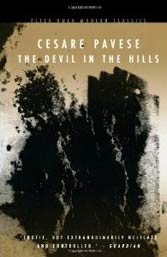 By Cesare Pavese, translated from the Italian by D.D. Paige

avese’s chilling X-ray of postwar ennui and its costs takes the form of three university students who fall in with a debauched rich boy whose country estate — the Greppo — casts a morbid spell over all who visit it. Oreste, Pieretto and the narrator, a thinly veiled Pavese, are carefree Turin students of rural origins who brush up against Poli, an indolent, coke-snorting womanizer (“a melancholy man, a man alone.”) When the self-destructive Poli invites his acquaintances to join him at the estate, where estranged wife Gabriella tends to him, the visitors are gradually enticed sideways.

Oreste, who is engaged, is smitten with Gabriella, who toys with him carelessly. Pieretto argues with Poli about the worthlessness of faith (“Life is weakness and sin,” insists Poli) and the uselessness of conscience (“a sewer,” insists Pieretto).

It is the narrator who senses primordial danger in the seductive goings on, seeing villa as an “island, a useless untamed place.” What was logical in the city is “naked and savage” in the hills. Nature’s bold attraction, once compelling, turns sinister. Suicide is a subject no one avoids.

For Pavese, there’s no innocence lost, only innocence misperceived. No life is shielded from shattering; no woman capable of saving the day; no landscape incorruptible. The “immoral egoism” practiced by Poli and Gabriella eventually contaminates everyone and everything, “the most private spots of the earth now penetrated and violated.”

The young men will eventually check out of Poli’s devilish world, but whether they’re really capable of leaving it, or whether an alternative actually exists, is far less clear. “Il diavolo sulle colline” was part of the late 1940s Pavese troika of novellas that included “Tra donne sole” (Among Women Only) and “La bella estate” (The Fine Summer).