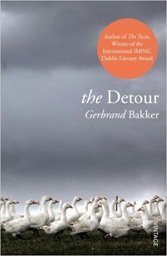 By Gerbrand Bakker, translated from the Dutch by David Colmer

There is Hemingway-style tenderness — laconic but polished, sympathetic but hard — in Bakker’s achingly sad story of a Dutch Emily Dickenson scholar who escapes from Amsterdam to a rural Welsh rental cottage following an affair with one of her students. Alone, she finds geese, mud, and a dwelling in disrepair. But that disrepair reflects her own, physically and emotionally, since in fleeing (“…like an old cat that wants to be left in peace”) she’s also abandoned a husband with whom she’s been unable to have a child. Just when she thinks she’s rid herself of the wry locals (they all think she’s German), a teenaged interloper appears on her land, and their bond — mother and son, friend and lover — uncorks past and present, slowly fleshing out an anxious, sexually precarious husband who nonetheless can’t bear his missing wife’s unexplained absence.

It’s a tale told with the deliberateness and precision of planting and harvesting, whose sensory intimacies Bakker, a professional gardener, confidently transfers to his narrator. She notices that alders flank streams, that trees need pollarding, that sods require removing, that the badger hiding in a bush might as well be “…a kind of small bear.” He taps Dickson’s own seclusion — his narrator calls herself Emilie, as well as the natural melancholy intrinsic to the novel’s two months —late November to later December — when little grows but much prepares almost diligently to die. If Emilie feels “a vague but persistent sense of deterioration,” it’s for good reason, with Dickenson’s poem “A Country Burial” (“Let no sunrise’ yellow noise / Interrupt this ground”) marking the mood.

Just as Bakker’s superb first novel “The Twin” captured absence, isolation and feelings withheld or unspoken, so this one also tills depletion and its consequences. Also published in English as “Ten White Geese.”