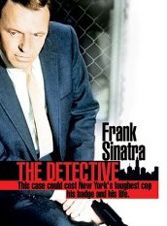 A fair amount of success with singing got in the way of Frank Sinatra’s acting career. But the acting knack was there. In Gordon Douglas’ mediocre cop flick, Sinatra is a New York City detective, Joe Leland, who probes the gay netherworld in search of homicide clues (risqué stuff at the time). Put aside the turgid and shopworn script and focus instead on Sinatra’s Leland: cynical and crusty. Critic Roger Ebert called Sinatra “hard-boiled,” and he meant it flatteringly. Sinatra had a way with police, as if by sinking into the unglamorous he might free himself up to explore creativity outside the suffocation of fame. The movie is based on Roderick Thorp’s novel by the same name. His next Leland novel, “Nothing Lasts Forever,” was adapted two decades later for a movie called “Die Hard” — with Joe Leland renamed John McClain. Boxer Sugar Ray Robinson has a cameo.