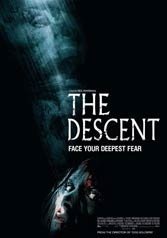 After a Scottish whitewater rafting trip with her best girlfriends, Sarah (Shauna Macdonald) is a car crash that kills her husband and young daughter. A year later, still shell-shocked and slightly haunted, she goes spelunking in an unmapped Appalachian cave with a slightly expanded group. In the cave is Hell in the form of blind and hungry half-men that hiss and click and feed on human flesh. One by one, the girl power posse is discovered and picked off. Or so it seems.

On the face of it, British director Neil Marshall’s B-movie is as hackneyed as they come. He manipulates the genre’s conventional trapping, darkness and claustrophobia, and adds shifty monsters at home in lakes of blood. What makes this otherwise linear yarn interesting is the sinister interplay between the suddenly Rambo-like women — Juno (Natalie Mendoza) is the group’s eerie shaman (“No risk, what’s the point…”) — and the fact that it’s never quite clear whether dazed Sarah ever even survived her movie-opening crash. Marshall takes a male-bonding road trip gone wrong and reverses the gender thrusters to dwell on resourceful women made feral. It’s a worthy horror conceit, but the cave chicks don’t stick around long enough for empathy.