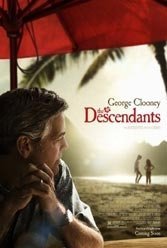 Director Alexander Payne’s movie is a nuanced tearjerker that gives George Clooney a chance to command a male-driven chick flick. There’s a wife in a coma; a husband by turn perplexed and angry; two daughters (ages 10 and 17) that won’t stop talking back; a family drama about lush Hawaiian land; and finally the small matter of a father forced to reckon with both adultery and impending death. Add a cloying soundtrack and contrivance rules.

Rescuing this messy telemetry from Hollywood leadenness is Payne’s intelligent use of Clooney to examine how men cope with confusion, grief, and unfamiliar responsibilities, as well as how they see women, whether wives or daughters. Clooney is Hawaiian attorney Matt King, one of a brood of longtime Hawaiian Brahmins, cousins all, and owners of vast parcel of entrusted land that developers covet. Only King can sign off on a deal to sell off paradise, but focusing on land at hand isn’t easy when your estranged, thrill-seeking wife Elizabeth is dead to the world after a boating accident and your two girls are, to put it mildly, a handful.

The constantly-bewildered King is overwhelmed by parental complication until back-from-rehab eldest daughter Alexandra (a perfectly cast Shailene Woodley) tells him about their mother’s affair. From this comes a father-daughter scheme to find the telltale man and bring him to emotional justice. Vulnerable Matt and bold Alexandra are perfectly matched; she a hormonal time bomb; he a middle-aged doe-in-the-headlights egged on by girl power. Stirring the pot is stubborn 10-year-old Scottie (Amara Miller), a narrative lubricant. “Why is it that all the women in my life want to destroy themselves?” King asks. The film’s answer is all about passion.

At its best — for example, a man-to-boy exchange between King and seemingly carefree Sid (Nick Krause), Alex’s boyfriend, whose father died recently — “The Descendants” is a generous story about how the story lines of even the strongest men depend mostly on what women say and do, or fail to say and do, and on the fickle biases of family. At its worst it’s an AA confessional that can’t get enough of its weepy significance. Take your pick. Aside from the story line, Hawaii looks very pretty, Beau Bridges delivers a cameo as Cousin Hugh, and Robert Forster makes the best of his brief screen time as Elizabeth’s judgmental father. If you like the song “Over the Rainbow” and have a penchant for ukulele notes, weep away.