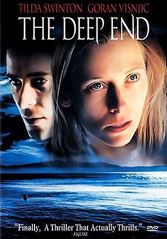 To protect gay teen son Beau (Jonathan Tucker), mother Margaret Hall (Tilda Swinton) disposes of the body of a young man she thinks he murdered. If the hide-the-body conceit sounds dated, consider that the movie is based on Elizabeth Sanxay Holding’s 1947 potboiler, “The Blank Wall.”

Directors Scott McGhee and David Siegel set the action in the present, in Lake Tahoe, Nevada, where Swinton is the dutiful wife of a naval officer who’s away at sea. Just when she thinks she’s shielded Beau, in comes a mysterious Balkan man (Alek “Al” Spera; Goran Visnjic) who claims he has damaging information and wants $50,000 to keep quiet. Seeing this little jewel pick up speed is like watching bath water drain as the vortex gets to spinning. Swinton (of “Orlando” fame) is riveting as Margaret, while Visnjic, the gifted Croatian, broadcasts menace and empathy. A fine and offbeat thriller.