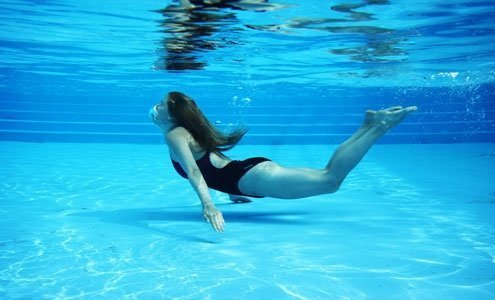 tanding by the side of the pool I felt the raindrops on my shoulders. Beyond the palm trees and jagged rocks, the Pacific Ocean remained still. It was far too early in the morning for anyone to be out and about. Eyes open, I dove into the warm saltwater pool, heading straight for the bottom.

As a child, my swimming teacher lectured me on the need to learn to swim on the surface, not just under water. I tried in earnest, but as soon as I’d let out my breath, my small body would sink. I’m dense. The deep end became my home. Sometimes I’d let my belly rest on the bottom. Floating was and remains difficult. To stay buoyant, I have to arch my back to let my chest expand. My legs often dangle beneath me.

I swam along the bottom of the pool, kicking off it for propulsion, imagining myself as a dolphin torpedoing upward. I came to rest on the surface, my upper body floating, my hair extending half the length of my arms, which remained spread. As I tried to float, my back arched and my legs dangling as always, I thought about a simple but significant question my younger son had asked me a few days before.

“Do you think you’ll ever marry again, Mom?”

Everyone I know, or so it seems, is divorcing and remarrying, sometimes doing both within months. My son is sensitive. When it comes to me, he doesn’t like not being in the know.

I wanted to remarry, I had told him honestly. It just wasn’t that easy. Dates were easy. Romance was easy. But finding someone who complimented me and I them, well, that was harder.

As I considered this, I let myself sink to the bottom again. There, peering up through the water at the sunrise above, the rain gone, I held my breath as long as I could before again shooting back to the surface, all the while pondering my own marriage, my past relationships, and the deep end below me.

I’ve had only a handful of significant relationships in my life — four to be precise. Metaphorically, I started comparing them to my lifetime of swimming.

For years I was married to a man who was an All-American in every sense. We spent almost all our time with our heads jointly above water, feet firmly planted on the ground, never letting anything become too uncomfortable or run too deep. We remain good friends who care for each other. Even now, as co-parents, we keep our heads well above the surface.

I also thought about the German man I became involved with, and loved, for four months. He and I had stood on the different sides of the pool, smiled at each other, and decided to dive in head first, destination deep end. But while I continued exploring the pool’s far ends, he lost his breath. Gasping for air, he retreated to the shallow side where his friends awaited and comfort was assured. I knew he still longed for the deep. I also knew he didn’t have the lung capacity to truly explore it. I climbed out the opposite end of the pool.

My relationship with the Canadian was all in fun. He didn’t swim but appreciated that I did. During the week I’d dive as deep as I could, resurfacing on weekends, when he’d have a glass of Dom Perignon and vacation plans waiting. After exactly a year I realized I no longer wanted to step out of the water. He took his cocktail party elsewhere and, still poolside, is happy as a clam.

The Italian I met while navigating the deepest parts of the pool. He took my hand and for the first time in my life I felt like I’d found someone who swam like me. We held our breath for three years, exploring, discussing, debating and loving. But whenever we had to leave the water to gather food, our hands apart for a while to cope with life on land, we’d fall apart. Neither of us knew how to survive together outside the deep end of the pool. One day we stepped out of the water together, both frustrated that we had to, and couldn’t find our way back.

My watery metaphor was suddenly interrupted by outside conversation. A man jumped into the pool and water sloshed over my face. I did what I always do. I let my breath out, sank, retreated to the deep end, and swam along the bottom. Until I found the stairs and left the water behind.