The death of a Saab 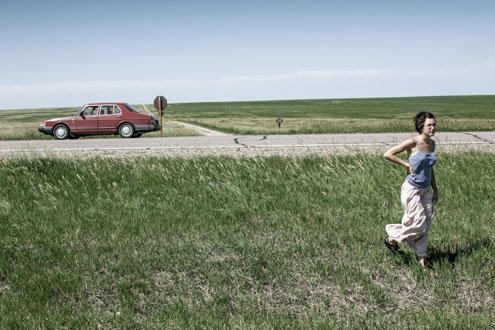 The author and her trusty-until-California Saab: on the road. Photos by Simon Griffee.
O

ne of the first things you should know about a Saab is that the ignition is located between the two front seats near the handbrake and stick shift. My red, four-door 1990 Saab was no exception. What was exceptional was that in 2005 my then-boyfriend, now husband Simon drove it across the United States. We drove it up mountains in Colorado and back down on unpaved roads that were as pockmarked as the moon. We drove it through Monument Valley in Arizona and over a tortuous dirt road in New Mexico to D.H. Lawrence’s grave. We drove it through Death Valley at night and over the hot Diablo Range to the foggy coast of California. So by the time we reached Big Sur and the Henry Miller Memorial Library we’d begun worrying the Saab had lost its verve.

That evening, outside Henry Miller’s house, the car proved us wrong — or seemed to. We started it up and slowly drove along spectacular Route1 until dark. We then pulled off and slept. In the car with us on our massive road trip was everything we owned, which didn’t amount to much: suitcase, backpack, tent, sleeping bags, cooler, mocha coffee maker, pan, pot and portable stove.

The next morning, Simon turned the key and the motor struggled to catch. But it did. He pressed the gas and the car barely moved. But barely was enough. Simon slowly drove to the next town, slid the car into a residential area, and that was that. When he turned the ignition key, nothing.

We found a garage in a phone booth Yellow Pages, left the car behind, and walked. A mechanic agreed to drive us back to the car, tow it, and have a look. He was clean cut for a mechanic and as we drove he told us a little about Carmel-by-the-Sea, the town we’d coasted into.

“Clint Eastwood was mayor here once,” he said. I studied the houses, their neat, square facades. Their lawns were as wholesome as the mechanic. The rich green of the trees and grass glowed as if polished, sheltered from the summer sun by the perpetual coastal clouds. Not a leaf or flower was out of place. I didn’t see a piece of trash.

“There are some strange cars here,” the mechanic said. “Once, I fixed the Batmobile!”

Simon and I laughed.

Clearly, the Saab had landed us in an expensive town. Unable to afford the hotels, we asked around at churches and community centers. We wanted to pitch our tent on a back piece of their lawn. “No,” they said.

After dark we wandered through the residential streets with our toothbrushes, tent and sleeping bags. We found a walking trail and made camp in a bend, hoping joggers wouldn’t fine us. We soon fell asleep, but a few hours later we woke up to a strange scratching and clambering outside. The sound was unlike any I’d heard in our weeks of traveling and camping.

“Rats?” Simon and I whispered to each other as if the whispering alone might make them leave: So much for clean and friendly Carmel-by-the-Sea.

The next morning we returned to the garage, stored our tent and sleeping bags in the Saab, and freshened up in the bathroom. The mechanic watched our ablutions, clearly curious. “Haven’t had a chance to look at the car yet,” he said. “Come back in an hour for the verdict.”

Off we went, again. Carmel-by-the-Sea was covered in fog and sleep. We sat down for coffee and people watching. In this town, people bought rhinestone collars and pink dresses for their dogs but couldn’t be bothered with giving up a piece of lawn as a simple act of generosity. We wanted no more nights here.

“Bad news,” the mechanic said, when we got back. “I can’t figure out what’s wrong, and whatever it is, it will need a part, and you know how much parts are for this kind of car, I’m sure. I suggest you get it towed to Monterey. There’s a campground and I’ve already called the garage and told them all I know about it.”

Good news for us. We asked him how much we owed him.

“Don’t worry about it,” he said, waving his hands at the ground.

We looked at him, surprised and grateful. “Really?” we said.

He nodded his head, smiling.

We did pay the tow truck to get us to Monterey, where the sun was shining. And though the Saab never made it beyond that garage’s parking lot, it got us far enough, to California, the golden land of dreams.