The Day the Earth Stood Still 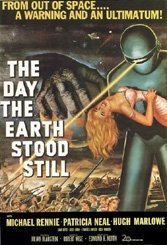 Robert Wise’s classic sci-fi morality play deserves a remake once or twice a century — for no other reason than seeing if it’s possible to find someone else gifted with the coldly melancholy urgency of Michael Rennie. Sadly, Keanu Reeves isn’t up to it.

Humanoid Klaatu (Rennie) arrives in Washington, D.C. from another world with tank-melting robot Gort in tow. He naturally scares the locals silly. They know no better than to shoot. Poor Earthlings. But the story takes a U.N. twist when it turns out Klaatu isn’t a warrior but a messenger. Earth had better stop blowing itself to bits (“I am fearful when I see people substituting fear for reason.”) or Gort and his robot race will clean up the planet’s juvenile delinquency.

Klaatu makes friends and influences people, but never really convinces anyone to substitute reason for fear. Which leads to the parting shot: “It is no concern of ours how you run your own planet, but if you threaten to extend your violence, this Earth of yours will be reduced to a burned-out cinder.”

Wise dishes out his share of saucer-era B-movie silliness, and Gort is no match for the digital age. Patricia Neal is also wasted as Klaatu’s confidant and the mother of a requisite “little boy.” But nothing detracts from the film’s universal message, as fresh now as in 1951.