The Day of the Owl 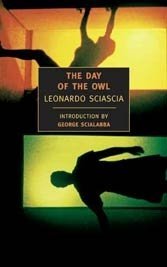 By Leonardo Sciascia, translated from the Italian by Archibald Colquhoun and Arthur Oliver

n the vein of most Italian prose critical of politics and politicians, Scascia’s slim but ferocious tale of Mafia intrigue and Italian government complicity — Il giorno della civetta — prefers insinuation to indictment, even if the two are tied at the hip and much of the novel’s narrative is lifted from countless violent tales recorded in the gossipy Italian press for more than a century.

In the Sicilian coastal town of S., a building contractor is gunned down in front of bus. Whispers suggest a Mafia hit. Soon after, a police informant is also shot dead. When Parma-born Carabinieri Captain Bellodi begins peeling the layers from the tangled Sicilian onion, he gradually also pries opens a Pandora’s Box rife with protection money, nicknamed assassins, and pillars of the community who insist the existence of the Mafia is an invention of leftists. Though Bellodi uncovers the truth, it will, like so many previous truths, melt “… like snow” into uselessness — since the underworld is nourished and protected by Rome.

The undeterred but often demoralized Bellodi grows convinced that family is all that counts in the Sicilian conscience, “counts, that is to say, more as a dramatic juridical contract or bond than as a natural association based on affection. The family is the Sicilian state.” Later comes a reference to “the great family group that is the Government,” squaring the impenetrable circle.

Sicily is a “soap-bubble” world moved by a “language of nudges,” a corrupt cauldron with a separate boiling point. Despite all this, stalwart northerner Bellodi remains bewitched by it all, which makes Sciascia’s novel a detective story that doubles as a romantic ode to an island and its theater of wickedness.

If you’re concerned about the 21st-century relevance of a story written in 1960, don’t be. In mid-2012, a key Italian figure expressed worry about “certain aspects of Italian behavior — such as solidarity pushed to the level of collusion.” That’s exactly what this story is about, and the worrier was Mario Monti.