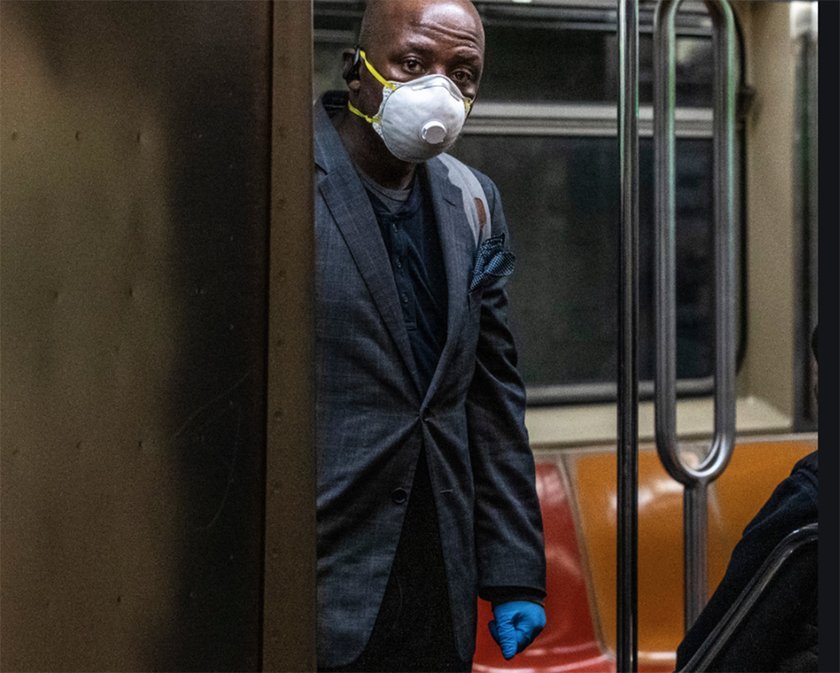 Everywhere you look, it's Darth Vader in the making, at least in New York City.
M

y friend Mary is in a funk. She thinks the world is coming to an end because of COVID-19. She posts alarmed observations on her blog and can’t get enough of verbally mugging people who don’t wear masks, like the two guys she saw walking down her street last week. “Here I am facing a global meltdown and the idiots around me are everywhere.”

When I tell her she might be taking things a bit too seriously and it wouldn’t hurt to lighten up, she spits in my face. Either you’re with her doomsday program or you’re a denier.

She hates Donald Trump. Most everything that’s gone wrong is his fault. She hates China, forgetting she visited it with her ex-husband during the 2008 Olympics and called it the time of her life. I still have the email. “This place is totally amazing and the people are so gracious and kind!” Now, China is lead player in some new Axis of Evil that George W. Bush isn’t around to invent.

I also try telling Mary she thought the world was ending after 9/11, and that at the time she thought Saddam Hussein was the world’s biggest monster. Twelve years later she visited Petra in Jordan and sent me chipper messages about the beauty of the Middle East and its people.

China is lead player in some new Axis of Evil that George W. Bush isn’t around to invent.

Americans get mad in a hurry. My father used to kick the TV when it didn’t work, blaming RCA for ruining his day. He was kinder to the Ford station wagon because it got us through a family vacation without a hitch. My father also hated Asians because he’d fought them in Korea, but this he never said aloud. He was a good, kind, and discreet man. He kept his raging under control.

Mary and her friends don’t, nor do a lot of people trooping through the worldwide web as if they should be anointed as the new faces and voices of Sherman’s Civil War army. It’s all about scorched earth, the more the merrier.

I’ll be honest: I don’t really get how you blame a pandemic on a president. I do get that he’s stubborn, insensitive, and makes up the truth as he goes along, but he didn’t make up this disease. And his decision to let states make up their own minds what to do pretty much followed his business philosophy. He was hands-on only when the building was finished, just in case it never was, in which case he could say it wasn’t his fault. What’s new? That he’s president? That because he’s president and there’s a crisis he’s supposed to change his personality? Please. If it weren’t for COVID-19 he might well be leading in the polls, especially against the likes of Joe Biden who started looking really cool only after he put on that Darth Vader mask.

Funny times in our O.K. Corral, if only they were truly funny — but they’re not. Trump will probably lose and we’ll get a repeat of 1981, when I was a kid.

Don’t remember? Let me unclear your cache. That was the year Ronald Reagan took office after Jimmy Carter lamely tried and failed to free American hostages who ended up being held in newly Islamic Iran for a year. Iran’s bearded menace, Ayatollah Khomeini, knew better than Trump how to be mean, and he released the hostages on Inauguration Day to make sure Reagan, not Carter, got any credit there was to get. I now see Biden taking office the first day a COVID vaccine gets approval. This twist would thrill Mary, and it’s actually possible.

I’ve spent lots of nights thinking about whether this havoc was all worth it, the lockdowns, the closures, the loss of jobs, the school disruptions, and different nights bring different conclusions. Sometimes I’m pro-life, as in; any life saved is worth it. Other times I think of my Dad who said what was great about America, or his version of America, was that even at the height of political disagreement it managed to present something like a united face. “Other people get ruffled,” he’d tell me. “We just scream at each other until the family seems to be about to fall apart, but then welcome friends and enemies as if nothing had happened.”

Make a decision, stick by it, take the heat from those who disagree, but get on with life.

I miss him. I miss that line, and the many ways he told it. He was a military guy, so discipline mattered. So did not showing weakness. He would have hated the last six months, above all because they’ve been an orgy of confusion and weakness and self-pity and what I’d call “Oh-my-God”-ism, as the whole country has gone into OMG text mode. It’s embarrassing, frankly. I love free speech but when two dozen medical experts can’t come up with a consensus view, or just prefer to exchange heated tweets, well, I don’t see the point. Make a decision, stick by it, take the heat from those who disagree, but get on with life. Don’t stop the world in its tracks to then get cold feet about the consequences. And while you’re at it, revise your inflated ideas about life expectancy.

Yesterday Mary told me Trump had placed her mother and father in harm’s way. Her mother is 84 and lives in Arizona. She has bone marrow cancer. Her father is 87 and lives in Florida. He’s had diabetes and congestive heart failure for a decade. Both are locked up at home and “safe” from COVID-19, at least for now. But what’s going on here? Are these people supposed to live until 120 because their kids have just had a guilt attack brought about by a virus? Mary never even talked about her mother — from whom she is estranged, by the way — until a few months ago. What’s with this penchant for immortality when COVID-19 is in play? Because had her mother died “naturally” I know damn well there wouldn’t have been a fuss. Some grieving, yes, some remorse, of course, but not the OMG-ism I mentioned earlier. God bless America, but people get old and die, of one thing or another. Black lives matter, so do other lives, but they all end. Some people’s lives end worse than they otherwise might have, because they lost their jobs due to a virus scare and can’t afford that great nursing home — and the circle comes round.

“People think being tough is like a Marine thing, with a snarl and gun and a flag,” said my father. “Tough isn’t that. It’s when you stay cool enough to keep crazy pressure from making you make crazy decisions you may later regret.”