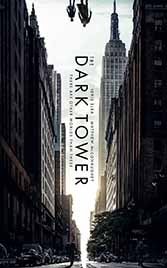 Stephen King long had a soft spot for Tolkien’s densely medieval make-believe and Sergio Leone’s John Ford-meets- Fellini spaghetti Westerns. That love nourished the epic, period-blending “Dark Tower” series written from 1982 and 2004. What then to say about Danish director Nikolaj Arcel’s “The Dark Tower” adaptation? Mostly that King’s layered works get the typical once-over-lightly Hollywood treatment, which means cramming too many themes into one movie, drenching them in trendy charcoal, and cattle-prodding them with digital gunplay. What did Arcel do wrong? He took on an impossible mission.

Idris Elba (the film’s savior) is Roland Deschain, a multipurpose warrior in town from Mid-World to “rescue” imperiled teen Jake Chambers (Tom Taylor), a psychic youth who lives in a New York City setting (Keystone Earth) but can see into parallel realms. Suddenly, gunslinger-sheriff-Galahad Roland, the interloper, and visionary Jake, are off careening between dimensions in a save-the-universes game of action chess. Lurking in Mid-World is Walter o’Dim (oh my), known as the Man in Black (man-for-all-seasons Matthew McConaughey). He’s a sinister sorcerer with an armada of famished carnivores and mischief aplenty for all the realms. Good Roland (with his little bud) must neutralize both dark man and dark tower, icon of the universes, or else.

References play as much of a role as plot, with the aforementioned Tolkein and Leone seeming to walk together down a nefarious yellow-brick road amid gnarled Fellini faces. Elba’s melancholy Roland is stalwart (there’s very little Elba does not do well). But so much of the rest is just a grand digital enhancement populated by one-dimensional characters that have nothing to do but fight each other on a loop. In “A Fistful of Dollars,” Leone zeroed in on a laconic, amoral loner who did things his way. He put his cigarillo-smoking anti-hero in a parched, no-frills world of cowboy caricatures and let scowling do the rest. Thanks to Clint Eastwood, the stripped-down formula soared. Here, ambience and action are made to carry almost the entire load, leaving heroes, villains and adolescents with little choice to have at it until the cosmic fireworks subsides.