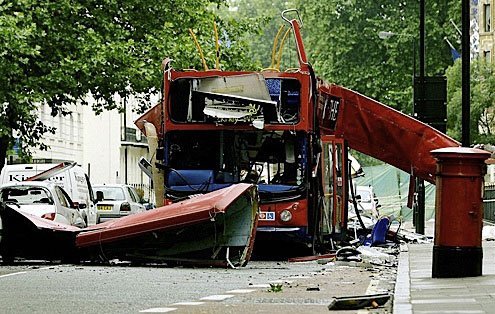 So bring it on, bad guys. The city has your numbers.

Fresh from London’s dead, urban July borrows bleakness on credit. The images are admittedly coercive. There are the many faces of the London dead, young and old, black and white. Enter troupes of scowling police, sealing off city blocks, prowling bricky innards, extracting ominous weapons.

Sneaky Islamists are also displayed, snapshots of cinders. But maybe you knew one? You could have a sleeper cellmate. Think about it. No joke.

So what’s stopping you?

So far, hyperbolic torment has yet to dent the continental summer. Shopping? Let’s go. Disco? Do it. Travel? Get me there. Scarred Europe won’t ingest colored alerts. Better not to drink from 9/11’s well. Paranoia is a known contaminant. Look at America.

Investigators now say all but one of the London bombers were Pakistani-Englishmen from Yorkshire, second generation British nationals who put aside football and cricket to blow themselves up in the crowded tube.

These were not Italians. Couldn’t be. Such cold blood. Such violence. Of course, yes, the Mafia. But that was in-house, a familiar ogre.

No, this attack was different, and the killers certainly Czech or Russian, Palestinian or Israeli, humans from colder poles. Italians didn’t slay this way. So efficient, monstrous, clean.

All wrong as it turned out. The attackers were Italian, most well-educated, well-read, determined, and angry. Who would listen, they reckoned, unless they waged war?

Red Brigades members of 1978 fit the profile that former London police commissioner Lord John Stevens wrote days before the Tube bombers were identified as British Muslims of Pakistani descent. Stevens guessed they would be “apparently ordinary British citizens, young men conservatively and cleanly dressed and probably with some higher education.” They would also have excellent computer skills and obtain knowledge of explosives, chemicals and electronics from internet sources.

But Stevens didn’t speculate how young Muslim men untouched by ideological repression and material scarcity would perform ritual mass murder-suicide. The routine explanation is just that, routine. Disaffected spiritually and socially, unhappy with their better lives, they are recruited by thoroughbred extremists who manipulate doubt into predatory militancy. The theory depends on deep and concealed hostility among the impressionable.

If that’s the case, implanted Islam isn’t the only culprit. When suburban-dwelling British Muslims (with everything to live for in Western terms) blow themselves up among rush-hour bystanders, studying what they defected from helps grasp the beginning of motive.

In this regard New York Times columnist Tom Friedman suggests that young Muslim men might be “ashamed of being tempted” by the West’s more decadent side. They are not assimilated, he asserts, which erodes their dignity. But does assimilation alone “fix” lapsed dignity? Doutbful.

Yorkshire life is quintessentially working class: Dull, bland and blunt, earnest but lacking in post-adolescent promise. Few get to London gainfully; fewer still stand to make a lasting mark. Heroism is out of the question; life’s “ordinary” circumstances are schooling, job and family.

Picking a fight has always enlivened the mundane. Until recently, world war helped slake male rage and give it purpose. Thousands marched tribally into harm’s way yearning to blow the meat off things. That world war’s cause had shared morality shielded institutional violence from critical doubt — even if the wages of the fight were time and again proved appalling.

Such yearning may be unfashionable in peacetime but it persists among both Muslims and Marines, who are alienated in different ways. Joining clandestine warrior fraternities — the antiseptic word “cell” is applied to terrorists — remains thrilling. Violent fraternity is as vital to a terrorist faction as it is to a military platoon. What differs are definitions of the sacred.

A society whose peacetime privileges depend on conformity, cynicism and contained violence will always contend with exasperated rebels who seek to wreck the status quo precisely because it is their own, and to them is jaded. Youth that suspects words, is riveted by authority, and deplores the uglier tidings of democracy will seek wrecking alternatives.

Extremism is goal-oriented and plain. Only its execution is difficult. Suicide attacks are also a kind of instant gratification that can’t be reproached to their self-destructing agents. Such attacks fulfill an intimate, anti-civil dare. The “apparently ordinary” are suddenly potent beyond their dreams — they are, as Stevens writes, “painstaking, cautious, clever and very sophisticated.” They are also probably very nervous.

Do Yorkshire Muslims expect supple virgins in exchange for their homicidal sacrifice? Nonsense. Do the lower middle class sons of Pakistani immigrants believe they will rise in the pantheon of martyrs? Not very likely. High-profile enterprises are often accomplished by those who want only to participate, and to be told how.

But the only war that qualifies by olden definitions is in Iraq, fought mostly by the United States and its soldiers. Civilians dwell on the abraded sidelines and listen to a procession of television experts psychoanalyze terrorist goals.

Passivity gets you fed up, fed up can get you lethal, and carnage is the most noticed of modern thrashings.

Which leaves a spectral League of Ordinary Gentlemen available for wrathful missions intended to poison a self-centered culture that can’t be bothered to observe them as they stray and is left to pay for that risky omission.