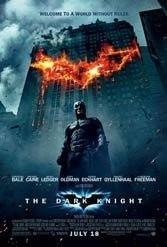 The best comic books series transported impressionable, adolescent boys into amazing realms in which the fight between good and evil became the sum of spectacular brush strokes salted with ambiguous shadings to let smarter readers ponder the tangled ambiguity between ideological absolutes — democracy on one side, an amalgam of fascism, communism, and anarchism on the other.

Director Christopher Nolan’s second Batman film, though overly long, succeeds on all comic book counts, thanks in part to a psychopathically feral performance from the late Heath Ledger, but above all because Nolan refuses to stray from a chiseled story line that calls on Ledger’s Joker to generate a series of “burn, baby, burn” events that organically produce a “beautiful, unethical, dangerous” response from all involved. Of his three “Batman” entries, this is the best by far.

Batman (the ever-moody Christian Bale), faced with Gotham in turmoil, must first deal with mob gangsters, and then their anointed surrogate, the disfigured Joker, who poses far deeper practical and moral problems. His is a disfigurement of character that Ledger, attentive to diction, animates with Marlon Brando menace (Jack Nicholson, who played The Joker in the original Batman franchise, opted instead for lunatic leering). “You complete me,” The Joker hisses at Batman, worming his way into the man-has-two-faces leitmotif that gives the film its verve.

Singer wastes no time and leaves nothing to chance. It’s a fight to the last-page finish, which Singer, like Tim Burton before him, wages in near-constant darkness. Few are the shots in which the sun shines. Not even the film’s heroes, police commissioner James Gordon (the indefatigable Gary Oldman) and district attorney-turned-avenger Harvey Dent (Aaron Eckhart), are twilight-free. Like everyone in this Bosch tableau, they’re adjuncts of madness, which makes the totality of the fight amorally even.

While action sequences are the film’s advocate, its half-dozen central figures are sculpted as people worth saving, or loathing. Nolan dwells on the fringes of human behavior in which lusty extremes bleed into one another, portraying a chaotic vigor. Here is a film that turns like a comic book page, and there may be no greater praise.