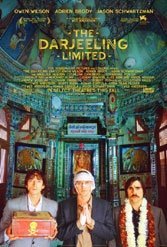 Wes Anderson hankers to make good on ties that bind. His 1998 debut “Rushmore” took a wildly quirky look at an American adolescence while 2001’s “The Royal Tennenbaums” delivered a lunatic New York family so improbable it filled the screen. Anderson’s gift with dead-pan noir made him a great young hope. But hope is perishable.

“The Darjeeling Limited” comes on the heels of 2004’s “The Life Aquatic With Steve Zissou,” a zany Jacques Cousteau parody that stops being funny 10 minutes in. In a nutshell, Anderson is in a slump.

This time, he opts for a more conventional tale, at least by his standards. Three quarreling, disconnected brothers are made to gather on an Indian train for a spiritual journey intended to foster peace and harmony. The idea belongs to Francis (Owen Wilson), the brothers’ “new age” emissary (Adrien Brody and Jason Schwartzman round out the troika). The trip itself consists of oddball encounters, poisonous snakes, deadpan slapstick, and moments of affected enlightenment that swing between satire and sincerity, courtesy of the Indian backdrop.

The dilemma is the that brothers aren’t particularly interesting, their dysfunctions plebeian, and their inclination toward humor more morose than satirical. In a nutshell, Anderson spins his wheels as if trapped in some unendingly mediocre Cat Stevens song stuck on replay. Dad is dead, Mom (Anjelica Huston) has become a Himalayan nun, and the misadventures our Brothers Three naturally bring them closer grow.

But none of it is revelatory, magical or even funny. Climax is anticlimax, and banal. No wonder Anderson has since turned to animated film. French-Swiss director Barbet Schroeder (“Barfly” and “Reversal of Fortune”) has a cameo as a… car mechanic.