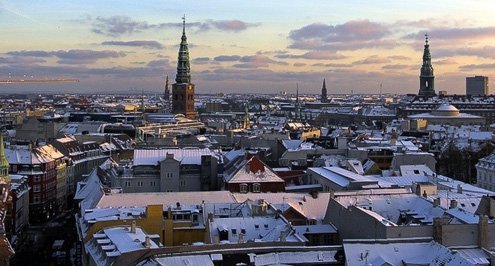 Copenhagen in winter couldn't be more different from Rome.
L

iving as an expat, I’m often asked if I’d ever leave Rome, whether sooner or later. The truth is, I’m picky about where I could or would live. Much like how some children only eat hot dogs and plain spaghetti, I’m choosy in my preferences — to the chagrin of my States-based family.

The weather should be mild, blue sky days more frequent than not; food must be fresh and unprocessed. I’ve never gotten over my phobia of driving a car, so a walkable city with public transport is a must. I would have to be fluent in the mother-tongue language. A superb cup of coffee in the morning isn’t necessary, but appreciated, and the city must be beautiful.

Goldilocks has nothing on me. My nearly four-year relationship with Rome can be characterized as successful and committed, admittedly lacking the spark of our early days, but nonetheless satisfying.

We were getting along just fine until a recent visit to Denmark unexpectedly swept me off my feet. If Rome was my long-term, live-in boyfriend, Denmark was the persistent, flirty, new guy whose Facebook profile I couldn’t stop checking. Perhaps it’s because the Danes (at least the ones I encountered) were exceedingly nice. A kindly man with spectacles and white hair sprinted up the steps of the train platform to check the times when I was in danger of missing my train, and ran me to the correct departure point. He smiled goodbye, triumphantly, as the train pulled away. My Air B&B hostess made me tea despite my midnight arrival and left wooly knit mittens by the door, in case I needed them.

The next day, a man keeled over on his stool at the diner where I was eating my lunch. A young guy tucked a blanket under the man’s head and gently stroked his cheek, lovingly, and said what I can only imagine were encouraging words. “It’s good his family is with him,” I said out loud, to no one in particular. When the ambulance arrived and the man was placed on a stretcher and carried away, the younger man stood up, washed his hands, wiped them carefully on his apron, and started to wipe down tables. He was just the waiter.

Maybe it was my surprising affection for Danish cuisine that made my stay so enchanting. Dark, dense pieces of rye bread were piled high with small smoked fish and pates and remoulades, garnished artfully with a wedge of lemon and a sprig of fennel. I ate them cold, with a knife and fork.

The sweets consisted of buns and cakes and cookies, filled with custards and jams and cinnamons that I ate in slow succession at the counter of The Little Biscuit House bakery, a cup of coffee positioned to my left. On my last day in Denmark, the owner gave me a lovely pink strawberry cake, tucked away safely in a white paper box with a handle. “For free,” she told me. It was either further evidence of Danish hospitality, or thanks for paying a week of her rent, or both.

The people of Denmark are stunning, too. The women are tall, willowy and fair, and carry themselves assuredly (but I suppose I would too, if I looked like I could grace the cover of Sports Illustrated‘s swimsuit edition). The men stopped me in my tracks. I’m proud of my evolution from morbidly shy college freshman to confident adult, but even ordering a hot chocolate made me blush. “Whipped cream on top?” the barista asked. I turned purple.

In Denmark, the young people dress in neutrals, palettes of beige and heather gray and black, structured coats with toggle buttons, and chic androgynous boots. When it rained, I didn’t see a single umbrella. Instead the Danes strode through it stalwartly. No fear of colpo d’aria here. Maybe I was taken with Denmark because of its attractions, or their absence. While I loved the modern art exhibits and Tivoli gardens, there isn’t so much to see that my vacation was spent darting from landmark to landmark. Instead, I indulged shamelessly in hygge, a Danish term used to describe cozy, candlelit cafes, lots of food, and good company.

By the end of my visit, I daydreamed about tossing my Italian life aside, of uprooting myself and starting over again. I’d learn to make sweet rolls. I’d master Danish. I’d have tow-headed, blue-eyed, bilingual babies who I’d take to Legoland and have picnics with in the spring. The possibility both scared me and thrilled me.

It’s been a few weeks since my trip, and I admit I still have Denmark on the brain. I’ve been making poor imitation of smorrebrod (open-faced sandwiches) for lunch, and have been reading “An Idiot’s Guide to Danish Culture” downloaded on my Kindle. The only remnants of my time let are some pastry crumbs stuck embarrassingly to my scarf, a ticket stub, and my bank statement, my balance much lower than before my departure. I’m left to wonder if the impressions were genuine or fleeting. After all, I was on vacation, and my live-in boyfriend doesn’t give up easily.