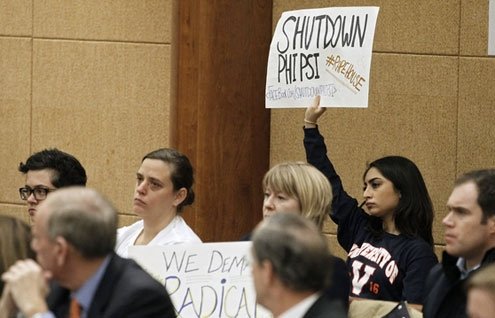 The November "Rolling Stone" rape report led to protests in front on the Phi Kappa Psi chapter, protests that have since subsided.
M

y first exposure to sorority life came as a nerdy freshman at the University of Virginia in Charlottesville, the Thomas Jefferson brainchild now at the center of a row about rape and bad journalism. It was 2003 and I was eager to “rush,” the first step in a time-honored sorority recruitment process. Clapping, wide-smiling girls emerged from their houses to greet us. That membership depended on first-impressions and looks came as no surprise. Sororities can in fact be a useful wake-up call for young women. Rushing can make them realize, faster than they might want to, that the girl-club world is less about intellectual curiosity and wit than appearance, social performance skills, and the ability to convince strangers that you’re coolly cut from the same cloth.

Our rush guide advised us to make nametags hinting at our interests and hobbies to help generate conversation. My nametag had an illustration beside the words, “Praha on my mind,” a reference to my love for Prague and then-Czech President Vaclav Havel. I thought it might make me seem sophisticated. It got me blank stares instead. I did get compliments on my hair (called pretty and shiny).

Demoralized by the spectacle, I dropped out after two rounds. At the time, I worried I’d be excluded from the fun to follow. I wasn’t. Instead, I flitted on the fringes of sorority life. I attended frat parties (free and fun). I listened to complaints from sorority friends who came to believe the system was a sham and a waste of thousands of dollars.

But others took it all very seriously. Later, after graduation, I moved to San Francisco where I bumped into some former Virginia students. The first thing one woman told me was that she lived with Kappas and Thetas. “You know.” Yes, I did know. But the post-college relevance eluded me.

My own experience with the frat party scene was a mostly happy one. I did see women friends mistreated, mostly through verbal abuse. But I also saw women hurl themselves at men who were either jerks or uninterested, or both.

Some frat men I met became my friends and looked out for me. But when men ganged up, especially near kegs and Aristocrat vodka, I often sensed the potential for things going badly wrong. Girls bore the brunt of jokes but too often said nothing. The line between tomfoolery and aggression could be very thin.

I once rode home in a cab with three frat boys, one a good friend. The cabbie was with his UVA-minded adolescent son. “I can’t wait to date girls,” the boy told us, and we all chuckled at his dreams of future parties.

But the boy seemed confused. “Will it be hard to get a girlfriend?” he asked.

I looked at Fredo, shocked. He shrugged. “It’s true. Not you, but you know what I mean.”

But I had no reply. I also had nowhere to put my righteous resentment.

I partied hard, but I lacked Fredo’s basic advantage. The only label that stuck to me was “girl.” For a “girl” wildness was a risk. If it went wrong, built-in penalties lurked. No matter the high-minded achievements, independence, and parental support, a girl was vulnerable to built-in judgments from which boys (will be boys) were largely exempt.

I hated it then and I hate it now.

Yes, girls could inspire age-old sexual chases in homage to some strong literary heroine they’d read about, but anyone who thought were primed to become a latter day Elizabeth Bennet or Jane Eyre was sorely mistaken. Independence and strong personal identity were myths.

Seven years later, I’m back in Charlottesville after years spent traveling, working and writing abroad — and putting distance between my adult life and my college years, which I look back with a mixture of affection and pain.

Reading Rolling Stone magazine’s November report, “A Rape on Campus,” the story of an alleged UVA fraternity gang rape as told through the eyes of a student named only “Jackie,” only revived the more painful side.

If the story wasn’t shocking enough — a graphic account of Jackie’s 2012 frat house rape, involving seven men — the magazine’s recent backtracking may have been worse. Less than two weeks after the article’s publication, Rolling Stone announced doubts regarding the victim’s version of events, and the reporter’s methods — methods it explicitly condoned by commissioning, editing and ultimately publishing the piece. Rolling Stone essentially repudiated itself.

Now, Jackie’s entire story, very possibly accurate (at least in part), is under siege, ruined by freewheeling reporting and lazy editing that inexcusably ignored all sorts of basic reporting premises. The Internet is predictably teeming with frat rage. “Don’t go on Facebook if you can avoid it,” a Virginia alum and frat friend told me. “There are a lot of bros going ‘I told you so.'”

I bet there are.

Rolling Stone admitted that the author, contributing editor Sabrina Rubin Erdely, never tracked down the frat boys Jackie had singled out, relying almost exclusively on the victim’s vivid and detailed recollection. “The mistakes are on Rolling Stone, not on Jackie,” wrote editor Will Dana.

Around campus, revived “bros vs. hoes” rhetoric is now pushing attention away from sexual misconduct, frat ethic and police laxity. The spotlight is on the faulty story. There’s no denying Rolling Stone did a poor job of vetting Erdely’s melodramatic piece, which reads more like a blockbuster movie script than a detailed piece of investigative reporting (the words “chilling” and “harrowing” come up often).

Erdely has defended herself through non-defense, saying she won’t divert “the conversation away from the point of the piece itself,” namely rape and police laxity. Her would-be nobleness fails to acknowledge the extent to which her misstep stands to deepen the pervasive (if little spoken) view that all girls cry wolf. Fraternity life has medieval dimension on campus, with hysterical accusers painted as a town’s witches, or, in these times, a town’s “hoes.”

That medieval torch is ablaze and it makes me crazy. I know two rape victims. One was gang raped (not at Virginia), triggering traumatic and debilitating mental illness. Her life is ruined.

But the Jackie damage is done. She is the liar. PBS news’ coverage of the fiasco has dwelled mostly on her inconsistencies. Washington Post reporter T. Rees Shapiro, an early Erdely skeptic, interviewed Phi Kappa Psi fraternity leaders who insisted they had no record of any parties at the time of Jackie’s assault (which means little, since fraternity life is often spontaneous and not all parties are dutifully recorded.)

In the end, it is a George Orwell remark that comes to mind: “If thought corrupts language, language can also corrupt thought. A bad usage can spread by tradition and imitation even among people who should and do know better.”

Many people in this case should have known better. But imitation and the indiscriminate wish to spread ill-gotten news prevailed over sources, facts, and possible consequences. This makes the language of journalism seem corrupt, if not bankrupt.