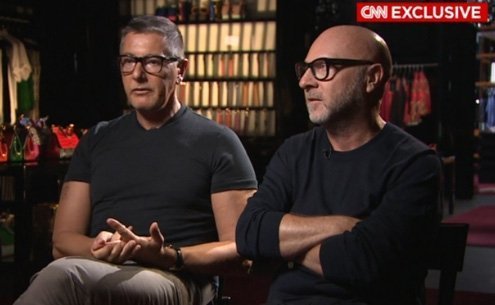 t’s 7 p.m. on a Friday and I’m hurrying down the small side street that runs past the entrance to Dolce and Gabbana’s global headquarters near Milan’s Piazza Risorgimento. The building’s façade is a glass wall with bright lights on the inside.

As I pass by, I see a weary-looking secretary seated behind the reception desk. I resist imagining Wilhelmina Slater (Vanessa Williams) from “Ugly Betty” or even Miranda Priestly (Meryl Streep) from “The Devil Wears Prada.” This isn’t a set and I long ago gave up on interesting comings or goings. Behind the glass and atop a flight of stairs are two ornate chairs, the locally famous Baroque golden thrones. They sit there as if awaiting the return of the “fashion kings.”

The “look-at-me!” world of fashion is like a Cinderella fantasy that promises magic with every new frock and pair of (glass) slippers. It’s an exclusive club whose ever-changing runway standards define what’s hot and what’s not, who’s in and who’s out. At the same time, the fashion world depends on getting regular people to believe that looks and trends matter enough to shell out hard earned euros and dollars for a pair of high-priced underpants.

It’s no secret the fashion world is filled with gay men. But the business side of men’s fashion remains schizophrenic. Men’s magazines like GQ, which no doubt got its start and receives continued support from a wide gay male readership, is nonetheless careful to present itself as heterosexual, typically offering advice on how to give girlfriends great orgasms. Saying “something is really gay” would take a bite out of the poison apple, jeopardizing marketing pitches and sending sales plummeting. A woman told me that when her husband heard that many gay men wore D&G’s “The One” perfume, he stopped wearing it immediately.

Many saw Domenico Dolce and Stefano Gabbana as a new generation of fashion designers ideally suited to a young and hip disco crowd that embraced the glamour and glitter of the 1970s but rejected out-of-date gender boundaries. They seemed to present a more “metreosexual” image of masculinity. The two men made no secret of their two-decade-long personal relationship. At first, they were hailed as pioneers in breaking the not-so-silent code of silence. But fashion moguls work in mysterious ways.

In March, the two designers set off a firestorm by telling Italy’s Panorama magazine they opposed gay adoptions and parents who used fertilization methods. The Sicilian-born Dolce did most of the damage. “When you’re born you have a father and a mother. At least you should have,” he told the magazine. “That’s why I’m not okay with kids I call the children of chemistry, synthetic kids. Wombs for rent, semen picked from a catalogue? Go tell one of these kids who his mother is.”

He added: “I’m gay. I can’t have a child. I believe you can’t have everything in life… There are certain things in life that shouldn’t be changed, and the nature of the family is one of them.”

They’re entitled to their opinions. But they’re also the opinions of fashion designers who live in a privileged world; each has an estimated worth of $1.6 billion (“the golden couple of Italian high fashion,” Panorama calls them). I don’t know if either has fathered a child. I do strongly suspect neither is an expert on topic of in vitro fertilization.

While insisting they were being traditional and not judgmental their views seemed perfectly in line with Catholic Church values, an interesting and paradoxical position since the Vatican continues to condemn their “homosexual lifestyle.”

Web response was fast and furious. Many saw the designers as sitting in judgment of all parents — LGBT and straight — who’s desire for a child had led them to give nature a helping hand. “How dare you refer to my beautiful children as ‘synthetic’,” said Elton John, who demanded a boycott of D&G goods. Ricky Martin and Madonna, who also probably rub elbows with the duo, were just as angry. While the designers told CNN their comments represented personal views (“We love gay couples. We love gay adoption. We love everything,” said Gabbana), it seemed like damage control.

When I was a teenager, I craved attention. Like many others, I wanted to be part of the “cool” crowd. Growing into adulthood I did and said many things that made me look foolish. Eventually, I learned the difference between calling attention to oneself in an interesting way and doing so offensively. I also learned some people are so desperate for attention they’ll say anything to get it.

Dolce and Gabbana seem to have done just that. They’ve insulted those whose lives they know nothing about. They’ve also hurt and alienated friends and supporters. Alone on their gilded thrones, I hope they get all the attention they deserve.