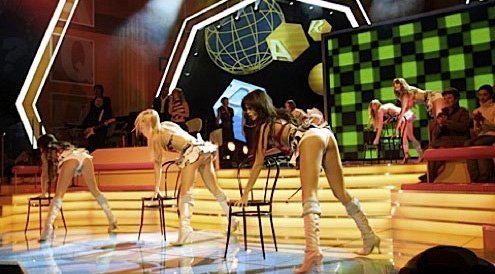 Assuming outrageously provocative positions is the name of the game.
N

ineteen-year-old Giulia Fogliani is one of six Letterine, or “little letters,” on the quiz show Passaparola. The Letterine are leggy young women, each about two meters tall in pink stiletto boots. Three have blond waist-length hair; three have brown waist-length hair. They wear white leather mini-skirts that begin well below the navel and end inches below the groin. They keep themselves busy during the eighty-minute show, dancing, clapping with the audience, smiling at host Gerri Scotti, and laughing at his jokes. With each episode, they rotate as lead Letterina.

On a Thursday in late 2003, Fogliani, then 18, took her turn in the limelight. For the show’s opening number, she performed a sexy solo dance, her eyes flirtatious, her body swaying suggestively a meter from the edge of the stage. A close-up camera climbed her torso as she danced, to catch every move for the audience back home. The ten-second interlude created, momentarily, the atmosphere of a disco.

Afterwards, she and the other Letterine danced together in a brief, perky number. When the music stopped, Fogliani joined host Scotti as he greeted his studio audience.

To some foreigners, it might feel odd watching sexy dancing girls on a television quiz show. Yet these scantily clad women are not only a staple of Italian television, they are one of its most distinctive features. Flip through channels any day of the week and you’ll see squads of them lip-synching and shimmying to music on everything from comedy hours to sports programs to game shows.

“Just as there is advertising, there is the girl. They are decorative; they are scene-setters. They are as much of a necessity as commercial breaks,” says Carlo Freccero, professor of mass communications at the University of Rome and the director general of RAI2 from 1996 to 2002. RAI is the Italian state television. “They are there to remind us that we are Italian.”

Using beautiful women to liven up shows is as old as vaudeville. Its roots in Italy can be traced to the avanspettacolo, a kind of vaudeville theater that flourished between world wars. In the 1950s, with the arrival of television, stage variety shows were transferred to the new medium, girls and all. Just like today, the women danced on stage, sometimes sang or acted in sketches, and often played beautiful, taciturn assistants to male hosts. It’s an old and popular formula that many don’t see the point in changing. “Television doesn’t normally favor innovation,” explains Claudio Cappon, former director general of RAI. “Because it requires enormous investment and there is the issue of advertising revenues. When one finds a successful device, there is the tendency to repeat it, to exploit it more-or-less to infinity until it is completely, utterly exhausted.”

In the late 1980s, with the growing popularity of privately-owned television, such as Prime Minister Silvio Berlusconi’s Mediaset (Italia 1, Canale 5, Rete 4), which produces Passaparola, the phenomenon not only flourished, but the clothing became sexier and the women younger. Take Non è la Rai (“This is not RAI”), a Mediaset program which ran in the early 1990s. It dolled up a hundred adolescent girls like chic Lolitas in miniskirts, and then shot them jockeying for a moment in the spotlight. It marked the first time, says Freccero, that groups of girls were employed on television as scenery and their antics used as a narrative device.

An earlier program, Colpo Grosso, which debuted late at night on Tele MonteCarlo in 1987, is viewed as a pioneer of sorts by Aldo Grasso, editor of the Encyclopedia of Television and television critic for the Milan-based daily Corriere della Sera. A kind of strip gambling game, contestants who lost at the slot machine or the roulette wheel had to remove items of clothing. By the end of the show, pretty contestants were often left standing in just their underwear. The show has since become a cult classic.

State-run broadcasters in Italy, heavily dependent on advertising revenue, have had little choice but to follow suit. Some 140 university students — all beautiful women — provided the backdrop for Chiambretti c’è on RAI2, a satirical current affairs show that ran from 2001 to 2003. Rows of pretty girls — and now boys — can still be seen on the game show Sarabanda. Over the years, RAI TV has deployed just as many sexy, scantily clad women as Mediaset, says Cappon.

Sydney Rome, a 52-year-old American actress, says that much has changed from the days when she was on Italian public television in the1980s. Back then “everything was chaste and religious. Even the leotards couldn’t be high cut. Berlusconi has just made everything fall out.”

Industry experts insist the phenomenon isn’t vulgar, but rather a reflection of Italy’s love of extravagant theater. “Exhibition and appearance are very much in the fabric of our national customs,” says Cappon. “Italians love to show and be shown, so it is not a question of sexual repression or anything like that but truly the taste for theater as exposure, as exhibition, which in Italy is not just on television. It’s in the street, isn’t it?” Passaparola producer Carlo Gorla agrees. The Letterine are “an ingredient of color, of warmth, of friendliness. They are an element to draw in young people.” He says that the women should be viewed as the “ideal little girlfriend” for the guys at home to daydream about. For the older viewers, “she has to be a nice girl, not adult material. It might sound absurd but, (we look for) the ideal daughter.”

Gorla says that Passaparola looks for girls with little or no television experience whose fresh faces will generate media interest. To protect their images, not to mention the show’s brand, Gorla says the production staff keeps close tabs on the girls, encouraging them to live together in group housing arranged by Mediaset, meeting with the girls’ families, hosting group seminars that discourage prima donna-like behavior, and even keeping an eye on who they socialize with off set and how they spend their time. He explains that 18-year-old girls finding themselves alone in Milan for the first time, with newfound popularity and easy living, unheard of for girls their age, can lead to trouble. “A lot of them think they’ve made it, and allow themselves to do anything … Unfortunately, for a lot of reasons, but mainly because they are too young and don’t understand, many get lost by the wayside,” he says.

Thousands of young women across Italy are willing to take that chance. Mediaset managers considered some 1,000 candidates to find the six Letterine who debuted this fall, says Gorla. Striscia La Notizia (“Rip up the news”), a popular satirical news program on Mediaset’s Canale 5, which features two pretty girls, one blond, one brunette, who dance, tease the show’s two hosts, promote products, and truly do — despite the skimpy clothing — look as wholesome as dairymaids, were selected from among thousands of contenders in a televised contest.

Air time on these shows is so highly coveted that a school specialized in training showgirls opened in October, near Naples. The school received €1.3 million in public funding from the Campania region and the European Union. Six hundred candidates competed for 97 places. Competition is fierce as these jobs on television can sometimes lead to careers as show hosts and actresses.

Letterina Giulia Fogliani never fantasized, like so many of her peers, about a career in front of the camera. The tall beauty with doe-like brown eyes and platinum blond hair, figured she would become an English translator, thanks to the language skills she learned from her British mother. A year ago, her mother sent Fogliani’s photo and an application to the Miss Universe Pageant without informing her daughter. It was accepted. Then Fogliani’s parents drove her from their hometown in Fano, in the Marche, to the first competition without revealing their destination. Fogliani says she fumbled her first walk down the runway, but was otherwise thrilled by the pageant.

She continued competing in a series of provincial and regional contests. Finally, Fogliani was selected as one of 25 national finalists. She didn’t win but caught the eye of an executive at Mediaset, whose office called and invited her to a casting call the next day. Her father dropped everything to drive her four hours to the Milan audition. A day later, she received another call. Fogliani would be one of six Letterine. “I didn’t even know what a casting call was,” says Fogliani, a high school student. “I was too little.”

Fogliani no longer aspires to become a translator. But when she discusses her dreams these days, she measures her words. She will not even specify what kind of screen career she’d like to have, admitting only her commitment to being a good Letterina.

“I respond to Gerri Scotti’s questions in my mind [he poses questions to contestants], and I keep myself highly active. Otherwise the time just doesn’t pass. But I think it is a positive [exercise] because there are so many girls that aspire to do this work, I have to do it as well as possible. Otherwise, well, someone else could take my place.”