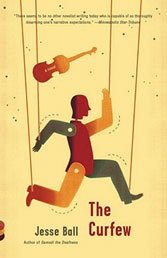 No denying Ball’s essentialness. His uniquely nocturnal vision is that of a poetic alien taught to read and write in English. In “The Curfew,” he ingeniously gives tombstones and puppets a beautiful ambiguity.

William Drysdale lives in a “city of empty streets” with his eight-year-old mute daughter Molly. He’s an epitographer, a man who writes the text of gravestones. Before that he played the violin. But now his city and country are run by a repressive regime: Imagine pitch-perfect Stalinism set in colonial times. William’s beloved wife Louise was murdered by the police, whose agents who no longer wear uniforms. When William makes his grave-writing rounds, Molly is in the keep of the puppeteer Siegfried Gibbons and his wife. Gibbons, once the impresario of the “Antediluvian Puppet Brigade,” writes a show to keep luminous Molly entertained. Is the show the book? Is the story in Molly’s mind or the oblique but sincere recounting of her timeless present? Is William Drysdale really meeting with the opposition at great risk and in violation of the curfew?

Ball is telling two stories at once: the first concerns the love of a father for his daughter, the second examines the literal, metaphorical and metaphysical impairment of society and its effects on those who suffer freedom’s suffocation. It’s a remarkable high-wire act that teeters at times on narrative preciousness. But no matter. The author confides his reality as absolute truth. So much so that Molly wants no magic in her puppet show. “Magic is either a poverty-stricken necessity or a wealthy fantasy. We are in neither of those straits, and what cannot be explained will be left unknown.” Thus, much is left unknown, magic is permanent, and the perfectly impaired world can’t stop dreaming.