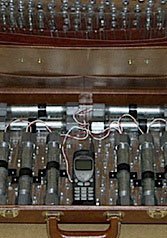 He chuckled, “But signora, there are no bombs in Italy!”
A

fter seven months of chasing down documents, struggling with the Italian Consulate in New York and selling off all the detritus of 26 years of marriage, we moved to Milan at the end of July, 2001. We being my husband, Dan, our son, Tim (age 12), and myself. Six weeks later, we were apartment hunting when the realtor told our relocation agent that someone had bombed the Pentagon. Of course, it turned out to be much worse.

I’m sure those events were shocking for all Americans wherever they were at the time. But being newly-arrived in a foreign country, having always lived in the United States, I felt extremely vulnerable. I watched the coverage and the crash video over and over on CNN that night, trying to comprehend what had happened and why.

The next day, the mood on the streets and in the subway had changed from the usual happy chatter to solemn silence. It was as if all of Milan were mourning with us. I saw on the news that people had left heaps of flowers and cards outside the American Consulate and went to see for myself. I had never understood the idea of sending flowers to a funeral — after all, what does a dead person need flowers for? But that day I understood that the flowers aren’t for the dead, but for the living. They are a reminder that life is brief, but can be beautiful.

About a month later, Tim and I were headed home one evening when I spotted a briefcase left between two parked cars. Before 9/11 I would have opened it to see if I could locate the owner. That evening I knew better than to touch it. About a block away, we found two carabinieri standing by their patrol car, talking to a couple of friends. In my limited Italian, I tried to explain about the briefcase, but they weren’t interested until I loudly exclaimed: “Forse è una bomba!” It could be a bomb! At that point, they had to do something.

One officer came with me. The briefcase was only a block away, but it was a long block. He griped continually about how far it was. I kept saying, “Pazienza!” Patience! In truth, I was losing all patience with him. He tried another tack, asking me where I was from. I told him that I’m an American. He chuckled, “But signora, there are no bombs in Italy!”

No, there was no bomb. But I was furious. If there had been a bomb, it would have been dead cop, dead me. I turned around and walked away, too angry and too lacking in vocabulary to tell him what a careless jerk he was. He called after me: “You see, signora, there are no bombs in Italy!”

— Editor’s note: The Italian Unabomber is the name local media have assigned to an unknown assailant tied to a series of booby-trap explosions in northern Italy that began in 1994. There were two such attacks in 2005 and one so far this year, near Venice. So far, the attacker (or attackers) has made no political or financial demands.