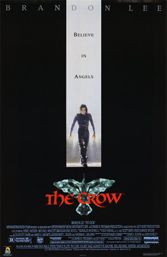 In “The Crow” and “Dark City,” director Alex Proyas can stake a claim to two of the best science fiction movies of the 1990s. Rock star Eric Draven (Brandon Lee, Bruce Lee’s son) and his girlfriend Shelley are murdered on their wedding eve. Draven (Raven) returns as an avenging angel in crow form. This became something of a cult classic after Lee, 28, was accidentally shot and killed during filming, but its worth is in the hoards of twilight visuals whose visceral impact are a kind of dialogue. Cinematographer Dariusz Wolski has a sixth sense about how comic book material fits on screen — slabs of dark butter over luminous buildings — while Lee looks every bit the emaciated rock’n’roll hero. The Cure and Nine Inch Nails give the flick its thump.