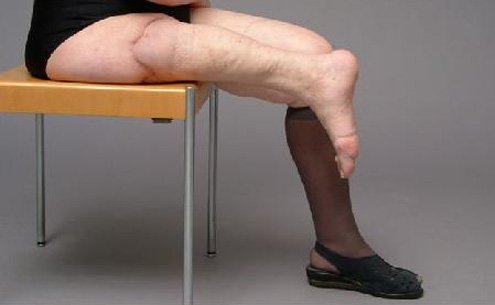 Rotationplasty all but reinvents the leg to give people a chance to walk again.
C

reativity in art has always inspired me, from Pablo Picasso to Pablo Neruda. But these days I’m discovering it in research labs and operating rooms. Medical creativity is closely tied to problem solving and innovation. Its beauty is people: those who make the effort and those whose lives benefit as a result. Three procedures I recently stumbled on make the point eloquently.

Rotationplasty: Brace yourself. Developed for tuberculosis patients around 1930 and used since the early 1980s for some lower limb cancer patients, the procedure is both brilliant and bizarre. Technically, it involves an “intercalary resection” and “180-degree rotation of the distal limb.” In practical terms, the surgeon removes and discards the middle (defective) segment of the patient’s leg, usually with cuts just above the ankle and above the knee. The lower (healthy) remnant of the leg is rotated so that the foot points backward. The surgeon then reattaches that bottom part of the leg so that the ankle joint now functions as a new “knee” joint.

Yes, that’s right. There is now a backwards-pointing foot dangling from the patient’s leg, at about knee level. Rotationplasty transforms an above-the-knee amputee into a below-the-knee amputee, making it much easier to walk using a modified prosthesis. The old ankle is the new knee. While it may look odd, rotationplasty can give patients — many of them children — a lifetime of walking, dancing, running, and even playing sports.

Distraction Osteogenesis: Discrepancies in limb-length, one leg shorter than the other, can be cosmetically and functionally devastating. Surgeons began experimenting with distraction osteogenesis — literally, forming new bone by pulling old bones apart — in the late 19th century. It was used for polio, tuberculosis deformities, congenital defects and poorly healed fractures.

Its early history was sordid, involving horrible complications — including death. In the early 1950s, Siberia-based Soviet surgeon Gavriil Ilizarov introduced the technique and device that represent the contemporary basis for distraction osteogenesis. Though surgeons had experimented with limb lengthening for more than half-a-century, Cold War paranoia kept Ilizarov’s improved technique under wraps until he treated Italian photojournalist and explorer Carlo Mauri in 1980. Mauri’s doctors were so impressed that his 10-year-old tibia fracture had finally healed that they invited Ilizarov to present his work at an orthopaedic conference in Bellagio.

To lengthen a limb, the surgeon cuts the bone that needs lengthening. Metal wires (or pins) are inserted into the bone segments on either side of the gap. These wires protrude through the skin. The wires are inter-linked by special ringed frames — known as an “external fixator” — that encase the leg. Manipulating the fixator allows the surgeon to gradually pull the bone segments apart at a rate of about 1 millimeter a day. This slow stretching process encourages the body to form new bone, blood vessels, nerves, muscle, and skin. When the desired lengthening is achieved, as much as 18 centimeters, the stretching process is stopped. The new bone is given time to harden. With proper planning, the patient’s legs are now equal in length, improving both movement and appearance.

Reverse Shoulder Arthroplasty: Appreciating the ingenuity of this procedure requires an anatomy primer. The upper arm bone (humerus) and shoulder joint (glenoid cavity) work as a ball and socket. The head of the humerus is the convex ball, and the glenoid cavity is the concave socket. Together, they form the glenohumeral joint.

Conventional shoulder arthroplasty, first introduced in the late 19th century in Europe, replaces both the ball and the socket with similar-shaped prosthetic parts It is used to treat severe shoulder fractures and conditions that cause shoulder joint pain, like arthritis. But activating this ball-and-socket system requires using a group of muscles and tendons called the rotator cuff. Patients with large rotator cuff tears and a painful kind of arthritis called “cuff tear arthropathy” don’t do well with regular shoulder arthroplasty, often suffering bone erosion, further arthritis, and loosening of the prosthetic parts. Surgeons in the 1970s realized the rotator cuff could be circumvented if the body was forced to use the deltoid muscle instead. This meant upending anatomy.

With new prosthetic parts, they turned the shoulder joint into the ball and the arm bone into the socket, yielding “reverse” shoulder arthroplasty. After the procedure, a patient can usually lift the arm just above shoulder height and bend the elbow to touch the head. These limitations aside, patient satisfaction is generally high, since before the treatment few options even existed.

Each of these procedures emerged because surgeons sought something better for their patients. To pioneer and perfect them required a fundamental shift in thinking about the human body. Ankles turned into knees. Bones were stretched. Balls became sockets. Surgeons painted brush strokes on the canvas that is the human body.

Many say the creativity of surgeons, like that of master painters, is matched by their egos. I won’t disagree. But I do understand. It takes deep creativity and considerable confidence to turn the body’s anatomy on end, to conquer nature — and get away with it.