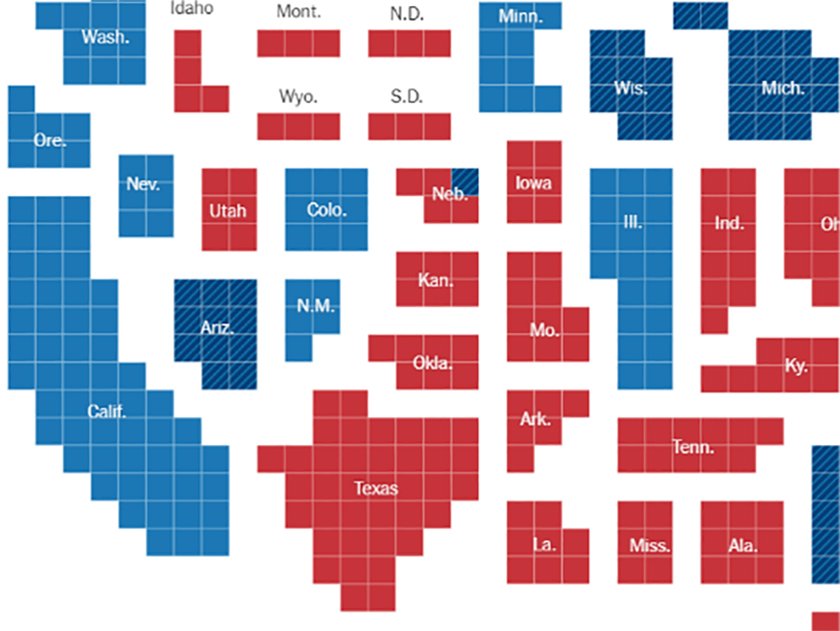 Out of the chaos and into a verdict.
I

n the days leading up to the U.S. presidential election, my mental scenarios weren’t exactly cheerful. Riots because Donald Trump won. Riots because Joe Biden won (though less likely since I live in uber-blue Los Angeles).

Not a pretty picture. So I picked up nine bars of soap, which I hoped would carry me through the post-election wasteland.

Walking to get some coffee, it hit me I’d better savor both the walk and the coffee.

But the morning after there were no riots, aside from the word “inconclusive,” used enough to start a riot of its own.

After realizing the world had not ended, at least not yet, I finally decided to venture out of my newly soap-rich apartment to, well, some coffee. Everything looked the same as it had looked the day before. No one around me behaved unusually. This spooked me enough to turn back to CNN for an updated look at the electoral map. To my surprise, a few states that had been in lingering limbo or tinted a light red were now colored light blue.

A strange feeling suddenly took hold of me.

Don’t speed up, our coxswain shouted unexpectedly: stay the course and focus on technique.

Blame it if you want on the up-tempo song playing on my earphones, but I felt something I hadn’t in a long time: that feeling of being in a fight you might actually win. I’m prone to imagining things. I’m an actress, which makes me something of a professional dreamer. My favorite scenario is one in which the gritty person or team takes a hard-fought (but earned) victory.

I rowed crew in high school so I have plenty of history in the gritty win-lose department. Rowing varsity at my New England school, we rose from bottom feeding in my sophomore year to a tie for first two years later.

On the morning after the election I recalled the second face-off my school had with its toughest rivals. We’d won in an upset the first time around.

The second the start gun went off, my muscles leaned into the pain they’d known was coming. But I also felt myself pushing beyond my normal threshold. The race was tight, and midway we found ourselves a fraction behind the other boats.

Don’t speed up, our coxswain shouted unexpectedly: stay the course and focus on technique. As the water’s chop increased, the other boats began struggling. But our oars glided millimeters above the turbulence. We’d stayed the course and were now pulling in harmony.

When our cox finally demanded power and speed, we responded. As we crossed the line, I didn’t have to ask who won. I saw the other boats before my eyes, which in crew means only one thing: they’re behind you.

This sense of hard-fought victory is what came over me as the election results began to come clear.

Though I’ve lost some of the muscle tone I had in crew days, the tone of my emotional memory is rock solid.

A Biden win was anything but clear that morning after, but that feeling of being in a winnable race overwhelmed me at a personal level, as I think it did many others, in what has been a difficult year. It’s the knowledge that when you fight for something you can actually get it, not always but you can.

Like so many others, I had spent much of 2020 burdened by doubt and without a compass heading, like being in a thick fog that forces you to stay still. When you can’t see around, even one step feels risky. So you wait, hoping it will clear. There hasn’t been much clearing lately.

But when Joe Biden came out and told his supporters to have faith, he sounded every bit like our coxswain, who told us to wait until the right moment, the words themselves suggesting that that moment might be on its way.

It’s been too long since I felt that way. Nearly a month later, there’s still some fog, and winning a race doesn’t mean you’ll win the next. What it does mean is that hope is present and accounted for, and, at least for a moment, the other boats are behind you.