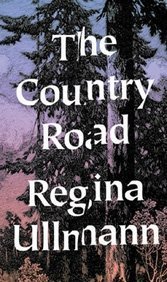 By Regina Ullmann, translated from the German by Kurt Beals

A winsome eeriness pervades Regina Ullman’s prose. The 10 elegiac stories in this volume are spiritual observances whose seemingly simple subject matter — roads, inns, taverns; farmers, young brides, sick children — is corporeal by chance. That’s because Ullman’s hymnal prose often projects the meditative quality of a reminiscing saint. The hardscrabble rural circumstance of most of these pieces are her St. Francis-like way of beckoning permeating shafts of light and encouraging them to acquire shape and scan the earth below, illuminating its sad residents. Of one character, she writes, “He felt the air perched lightly on his hand like a ladybird,” and in her hands air seems in fact to perch. This same man also believes he may love the dull-witted girl he’s taken in, a romantic defeat that defies speech: “Being asked about love for the first time is like being thrown into a river.-” She begins another story with similarly quiet if ominous wisdom: “The value of our existence is by no means always a function of its weight.” Elsewhere, a man who sees a mouse dead in his trap, though pleased it no longer bothers him, must also note, “… we are bound to all the suffering that occurs on our account.”

Overlooked Swiss poet Ullman (1884-1961) published “Country Road” in 1921 to great acclaim in German-speaking literary circles. Fellow poet Ranier Marie Rilke praised her languid, disembodied sensibility, understandably so, since Ullman’s vantage point nests above life but before death, among the fragile nooks and crannies of angels, a zone beloved by Rilke. Robert Musil and Thomas Mann were equally rapt, the latter calling her work “something holy.”

It can seem that way at times. Ascetic even. “Our dreamsure wakefulness” is no match “for the human language of renunciation and solitude,” and most of her people are isolated, insular, including hunchbacks who make violins she, the pious narrator, believes await angel players. Even in the one story that adduces modernity, “The Hot Air Balloon,” she cannot and will not relent from precariousness. “What if the balloon were stranded over the sea, for ever and ever, until its pilot died of grief…” And what about the world itself, “…painted on porcelain, right down to the dangerous cracks. —”

This is writing about that world — “big and wide and unwelcoming” — the beautiful endurance, a perfect paradox, of those compelled to live in it. Kurt Beals’ translation is itself a thing of beauty.