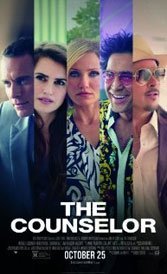 Dazzling verbiage aside, Ridley Scott’s fatalistic film is about a Texas lawyer (Michael Fassbender) who picks the wrong playmates (the Colombian drug cartel) and is forced to watch as both his beloved (Penélope Cruz) and his lurid associates are heinously chewed up and spit out. It’s also about, or wants to be about, a vile woman — in this case one named Malkina (Cameron Diaz), who owns two cheetahs, praises predators, and manipulates bedfellows. The bringing to life of this squalid if predictable darkness is given over to Fassbender, Diaz, Javier Bardem, and Brad Pitt, who all seem sincere but stilted, even confused. That may be because this labored Ridley Scott film often seems more like one conceived of by his late brother Tony, whose career-long niche was violence-packed morality tales (see “Man on Fire.”)

It opens with the slick lawyer — the counselor — whose rapture for wife-to-be Laura (Cruz) leaves him hard up for cash. He teams up with shady nightclub owner Reiner (Bardem, luminous as always) and drug middleman Westray (Pitt), hoping to rake in a share of a drug deal. When Malkina’s manipulation sidetracks it, the lethal squeeze is on the counselor, and it takes no prisoners.

Part of the problem, unexpectedly, is a portentous script by American legend Cormac McCarthy (author of “No Country for Old Men”) that impedes cinematic pace. He has two aims: a Hemingway-like examination into what men will do for women, and death’s highfalutin inexorability. Too often, pretty soliloquies sink character into fraught parody. A Sephardic Jew diamond cutter (a scene-stealing Bruno Ganz) speaks ominously about the brevity of life; the nefarious Malkina, a Cleopatra-like goddess of sex and death, warns boyfriend Reiner about the perils of greed; a drug lord philosophically advises the counselor to resign himself (“You are the world you have created…”).

Yes, Bardem gives a typically colorful performance, and Pitt is snarky and sly. But there’s simply no drama here; nor any compelling sense of why the counselor (a character Fassbender never fully inhabits) is worth concern. Instead, the Scott-McCarthy team has concocted a beautifully lubricated descent into an annihilation that is treated from the start as a forgone conclusion. There’s greed, eccentricity and, of course, brutality — with all else, including hope, tediously poised on the brink of a two-hour abyss.