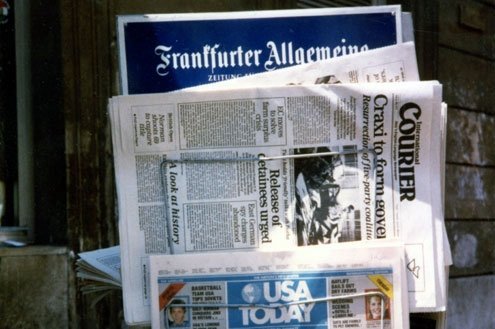 ou could tell the demeanor of the devourer of political thrillers by the behavior of the two kittens quietly baking on his chest. On the day he roared they parked sleepily on their human heat pad as he read a European political thriller by Fredrick Forsyth. Forsyth, a generally dependable writer, had unfortunately chosen a subject the devourer knew far too well: French politics, and Charles de Gaulle in particular. Midway through a chapter, the devourer bellowed, the book flew across the room, and the kittens sought repair in corners.

Forsyth’s kitten-marring faux pas was factual mistreatment of de Gaulle and aspects of Paris of the 1960s, or so said the devourer, my father. If one error disrupted his hard-won disbelief, several turned him into a raging bull. “Write what you know,” he roared. The kittens eventually returned with trepidation.

A few decades before, Percy Winner had published his own first novel, about 1920s Fascist Italy, which he labeled “an autobiographical reminisce” to better separate fact from invention. His period-piece detail was immaculate: “We were sitting at a table on the sidewalk terrace in front of Aragno’s drinking Americanos — Cinzano with seltzer, bitters and lemon peel.” A central Rome osteria “was a third class place with sawdust on the floor, smoked ham hanging from the ceiling rafters by strings. The tables were bare.”

“Write what you know.”

In 2006, the gifted American Andrea Lee published a romance called “Lost Hearts in Italy.” Her credentials are immaculate: Italian husband; years lived in north Italy; full command of Italian. Her narrative flashed back and forth between Italy of the distantly remembered mid-1980s and the present.

The wheels came off early.

In 1986 a Lee character bemoans Craxi government scandals, complaining about prosecutor Antonio Di Pietro and Tangentopoli bribery investigations. But Craxi was still unscathed 1986. The scandals came later. The same year, someone makes mobile phone calls from a jet parked on the Rome tarmac. Impossible since the year predates their commonplace existence. Then, in 2005, a boat bobs off “Yugoslavia,” by then very much an “ex” state.

“I want your life!” an editor gushes to the book’s woman protagonist, “Oh, to be a writer in Italy!”

But being a writer also means getting the little things right so that the bigger ones carry a more credible heft.

I recently read a lavishly-praised first novel called “The Imperfectionists” by a London-born journalist named Tom Rachman. It’s a caricature about a fictitious English-language daily newspaper in Rome, of the real kind I once edited. Rachman has worked in Rome and Paris. His face-value credentials are excellent.

But he, too, roils kittens.

One character is trundled off to the airport for a night flight from Rome to Philadelphia — a no-no. A wacky freelancer tells a young wannabe he was once nominated for a Pulitzer for the Rome paper, when the prize is limited to newspapers published on U.S. soil, the cause of many a journalist’s return home. The paper’s editor-in-chief, a woman, is bewildered when she discovers that an ex-lover works for Silvio Berlusconi: she’s largely ignorant of Italian politics. The newspaper’s American-managed employees earn not only living wages but have benefits (in Rome?). A copy editor feasts on Häagen-Dasz ice cream (in Rome?). Not a single scene takes place in a “bar” (in Rome?). Hiring and firing is simple (in Rome?).

The data-rich, global village 21st century would seem of itself insurance enough against lazy error. After all, facts are easy to find and check. The reality is the opposite. Stereotypes, rumors and diehard clichés simply make the rounds faster. Dan Brown’s conspiratorial Vatican is the church of choice.

But here’s the rub: Casually inaccurate portrayals can fill in for truth, which is why trivial faults such as night flights from Rome to Philadelphia are so potentially dangerous. Collectively imagined foreignness, the details assigned to the nations of the mind, can matter more than what the military calls the facts on the ground.

Consider Iraq and Afghanistan, vessels of culpability for all things evil in the wake of September 11. Layers of collective misreading produced bad assumptions and dire consequences.

All the more reason not to upset the kittens.