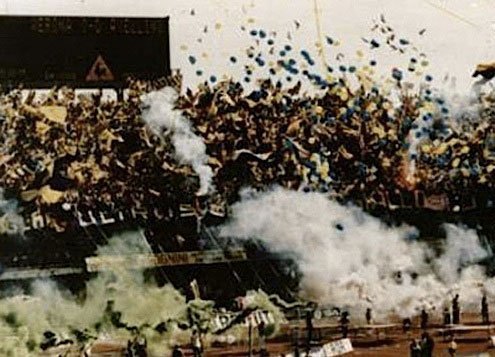 Hellas Verona's 1985 Serie A title was a stunner. Only four other "provincial" teams have won in the last 40 years.
N

ow hear this. The implications of the soccer scandal that is rocking Italy have little to do with cheating. They mostly concern humbling and redress.

Let me explain, with background first. Wiretaps conducted by investigating magistrates in several Italian cities have revealed conversations between ranking northern club officials and representatives of referees, with the intent to rig matches.

The entire Juventus of Turin governing board has resigned; so has the head of Italy’s soccer federation. More resignations will follow, with criminal charges likely. The intercepts, for now, appear to implicate Juventus, a perennial powerhouse; Milan, another big spender and Silvio Berlusconi’s pet; Lazio, a Rome team; and Fiorentina, the beloved Florence club that has only recently clawed its way out of financial ruin.

For decades, not years, the soccer-loving public, particularly in the south, has assumed that refs favored northern teams. The northerners were rich — Fiat owned Juventus, Berlusconi ran Milan — while the central and southern owners were literally provincial, if not parochial. The cynical world view held by many Italians mandated that the rich would do whatever necessary to protect their interests, including jostling the rules at will. What annoyed the public was not the abuse itself but its impunity.

Nothing ever balanced the sheet.

That’s what this scandal is about: it’s what the free market calls a “correction.”

Juventus and Milan piled up championships in the 1980s and 90s (only five genuine outsiders have won titles in the last 50 years: Bologna, Cagliari, Fiorentina in the 1960s, Verona in the 80s, and Sampdoria of Genova in 1991). The Turin-Milan axis (59 titles overall) won not only because it could purchase the best players, but because when those players faltered the “inner structure” covered pitfalls — this, at least, was the prevailing view. Conspiracy theorists raged first in newspapers and later on talk shows. It was all so unfair, they said.

Now, with the apparent unmasking of an Axis of Northern Evil plot — “championship-fixing, not match-fixing,” observes the Irish author Paddy Agnew — the benighted are in eleventh heaven. News of the scandal, which comes a month ahead of the World Cup, has spun around the world, with British and American newspapers getting suddenly righteous and expert. Presidents and prime ministers, even the Vatican, have weighed in with finger-pointing gravitas. A kill-the-lawyers mood, directed at big club soccer bosses, has enveloped the country.

But all Italy cuts corners: government officials, judges, industrial chieftains, small business bosses. Amoral expediency is a way to hack through the more enduring (not endearing) aspects of Napoleonic bureaucracy. Simple undertakings are difficult. Directness and economy of approach are vices. Indirectness, refined into art, is prized. Cheating is a kind of art, so long as you’re not caught.

But soccer should be different. It is, after all, about winning and losing. It’s intended to cheer the convulsions of chance. What, then, if there is no chance? That’s what the scandal gets to. It appears to prove that chance is fiction, a demoralizing perfect Italian realization. Dreams are meaningless because they’re subject to marring by higher powers. Soccer scandals, when they happen, are the mother of “I told you so-s.”

But are they about justice? Honestly, no.

They’re about getting even with those who cut corners. It’s a leveling mechanism, a kind of deus ex machina Robin Hood maneuver. And it’s happened before: in 1980, two great players, Paolo Rossi and Bruno Giordano, were humbled before being redeemed; it the early 1990s the Mani Puliti (Clean Hands) probe savaged the Christian Democratic and Socialist parties before yielding the ascent of Berlusconi, whose malfeasance allegedly is on par with dirty tricks of old. In Italy, crusading magistrate occupy the role that social liberalism (such as it is) nurses in the non-Latin world. Magistrates are the forward agents of compensation in a country that’s messy with accountability. In an ironic bit of geography, the most aggressive prosecutors in the Juventus case are based in Naples.

But back to the facts: should Juventus officials have spoken to referees? Of course not. Should the head of the referees committee have accepted a call from a club official? Madness. No again.

Still, the unfolding events are very much part of a self-fulfilling prophesy — rich vs. poor, north vs. south, industrial vs. rural — that demonstrates the rawness of Italian modernity. Soccer, a multi-billion euro sport, hovers a mere centimeter over the feudal world.

The great Diego Maradona played for Napoli, the once-mighty Naples franchise, while high on cocaine (the same happened at the 1994 World Cup, where more drugs were found). Later, as a broken man, he begged forgiveness. Naples gave it to him. He was one of them, a member of the clan. He’d won championships for underdogs. He wasn’t of Turin or Milan. He was a crook of exceptional talent and lineage.

Otherwise his fate would have been far, far colder, and now there’s a chill in the air.