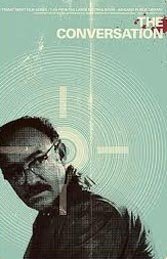 Professional communications expert Harry Caul (Gene Hackman) is a wiretapper for hire, a veteran surveillance pro who in appearance doubles for the traditionally repressed American everyman. Laconic and efficient, he works out of San Francisco and does what he’s told, speaking only the language of his equipment. Prying isn’t in his lexicon, since his own insulated world resists most outsiders.

Working for a private client, Caul and his cohorts tape a conversation between a man and a woman in a park in which they seem to fear for their lives. At first, Caul responds to what he’s heard with typical aloofness. Until he begins listening more carefully, breaking down the sounds as if they contained some essential truth. When he finally capitulates to doubt and tries to find out what happened to the worried couple, his sinister employees cut him off, treating him first as an inconvenience and then a zealot. This is writer-director Francis Ford Coppola’s opening to push the Catholic Caul into the maws of hell, which in this case combines layer upon layer of paranoia and guilt.

The more the deeply the nonverbal Caul becomes convinced he’s overheard a terrible plot, the more Coppola’s screenplay pushes him to the margins of any known reality. Up against forces larger than himself, he’s increasingly determined to get answers, or to make amends.

But how much of what he’s hearing and seeing — including a memorable scene in which blood swirls up from a toilet bowl — is being imagined? This ruthless combination of doubt and exasperation, rubbed against psychological kindling, eventually produces Caul’s extraordinary meltdown, like fission itself but human,

Coppola’s careful but fiercely intense portrayal of a man torn between the amoral task at hand and the disturbing realization that he can’t elude consequences of what he’s been complicit in has rarely been matched on film. Nor for that matter has Hackman’s stunning performance as a man who hears from the abyss of others, and then invents one for himself.

Coppola will forever be known for “The Godfather” series and “Apocalypse Now,” but this paper-cut of a movie may be his most lucid work.