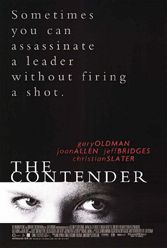 Before Rod Lurie took his crusading vigor to American television (“Line of Fire,” Commander in Chief”), he made this adroit political thriller that elicited top-notch performances from Jeff Bridges, Joan Allen, and Gary Oldman, three deeply gifted and affecting actors.

What this film is not about is sex. Instead, it’s a keenly pro-liberal study of power politics with an emphasis on personal honor and loyalty. Allen is the ideal foil to Oldman’s deviousness: both are masterful. It’s hard to believe Aaron Sorkin beat Lurie to the idea of “The West Wing” — the movie and the series are kindred spirits.